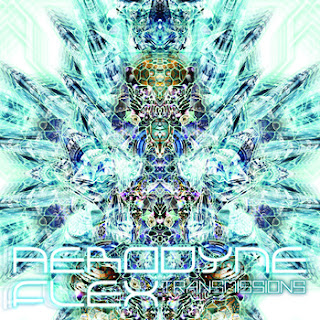 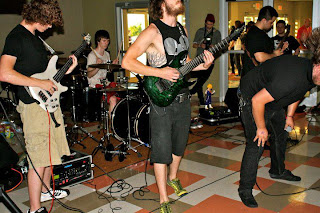 Yes, yes, I'm covering yet another band that can be found on got-djent.com. I got this one a little while ago and thought that it stood out enough among the other djent groups popping up as of recently. I also thought that the cover art was pretty interesting (as it kind of recalls Meshuggah's Nothing).
I know I cover quite a bit of this stuff but I think that by now if you've figured out you don't enjoy it, then you'll wind up ignoring these reviews anyway. So, with that being said, I'll get on with the review. What struck me enough about Aerodyne Flex's debut album was that it surprisingly didn't rely solely on the Meshuggah low-end chugtastic form of songwriting and instead took a similar approach to groups like Periphery, Haunted Shores, and Animals As Leaders. Sure, it's not devoid of your low-end chugs or djenty palm-muted sections, but there's a lot more progressive and melodic ideas that obviously come from groups like those. Some of the chord progressions sound like they came straight out of the Periphery playbook while the certain clean sections owe a debt to the like of Tosin Abasi. But I will say that these guys definitely do have a sound that is different from any of those bands, whether that happens to be good or bad is up to each listener, but I did find it quite grabbing. I have to give the band props for relying on the whole Meshuggah influence very little on here, with Requiem being probably the biggest use those ideas coming in over halfway through the album, and not even dwelling on it for too long before shifting tone. Plus, by the time we get to that track, with everything else the band has done on the album, I think they've kind of earned a chance to just do a groove track.
Ok, it's obvious that these guys can play, without question, they fuse technical sweeping and djenty chugs with more melodic and semi-electronic inflected calmer parts with ease, but there are a few weaknesses on here. First of all, I do feel like the vocals are a bit too one-dimensional for the majority of the album. While there are a few tracks where he does break from the standard hardcore/metalcore growl, I feel like with music as diverse and progressive as what these guys are pumping out, the vocals should follow suit. Unfortunately, they are just average and don't stand out from other vocalists enough to really fit with what these guys are doing instrumentally all that well, though I do give him props for at least trying to do new things on a couple of tracks. Secondly, the production. While it's not bad, it does have that extremely high-end sounding production which does prove to be a bit annoying when listening to the entire thing. The low-end just didn't have enough power to hit me as hard as I would have liked it to. The last problem is more of a personal one and it has to do with the production as well, which, for me, sounded a bit too bright. The whole high-end style is fine but there really wasn't a whole lot of dark moments on here. The band have plenty of dynamics, but it's a pretty upbeat album for the most part, which I have no problem with, but I would have liked to hear the band make use of some darker sound riffs or sections just to kind of make this album less sugary (if that makes sense).
With the last four tracks making up the title-track suite, you'd imagine that this is pretty much the deciding factor of whether or not you'll like the band (if you so happen to listen to the album) because the tracks that preceded them, while I praise the band for their ideas and originality, aren't the best of songwriters as of yet. Quite a few parts are very well done but don't really stick with me, then we get to the title-track suite and boy was I surprised when the band actually pulled it off. While Air is a pretty stereotypical clean intro, Lose is a nine-minute prog track that really shows off what the band can do. Musically, the band demonstrate all of their strengths, which include some really great solos, from the previous eight tracks (I am excluding the first part of the suite here), but vocally we actually have the introduction of clean vocals. Honestly, they are not the best, but seeing as this is the only time they were used, I can't say that they ruined the song for me or anything like that, but they are weak sounding and I think that they do need work. Gain is a pretty schizophrenic track with ideas coming in from djent, death metal, prog metal, and metalcore before transitioning into Endless which closes things out nicely by recalling a lot of the ideas present earlier on in the album.
There are some really killer ideas on here, but they just aren't that memorable. I think the band do have a well developed sound, now they just need to work on their songwriting a bit more and I think they'll have a winner on their hands. If you happen to enjoy djent or modern prog-metal I do think this is worth checking out.
Overall Score: 8
Highlights: Carbon, Requiem, Transmissions II: Lose
Posted by maskofgojira at 2:32 PM