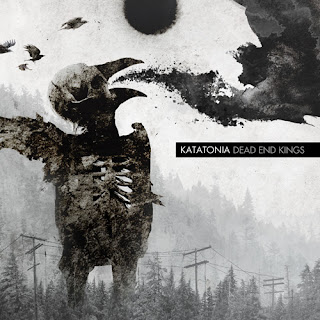 Let me just make something clear, I love Katatonia. Ever since I heard My Twin several years back they've been one of the most important bands in my life. They are a band who have yet to put a step wrong in my opinion and every new album is a treat.
If I may be allowed to go off on a small tangent to start things off, I thought 2009's Night Is The New Day album was a masterpiece. If it means anything, it was my album of 2009. It's an album that means an incredible amount to me and I think still holds up to this day and there is not a weak song on it. In addition to that, The Great Cold Distance and Viva Emptiness were no slouches for albums either, with each one improving on the sound of the last until they hit the pinnacle of Night Is The New Day. I know that some people weren't all that excited or into the more ambient and electronic ideas that the band embraced on that album and I think that it's fine if they couldn't play the majority of those songs live because they weren't as guitar based as their older material, they still crafted an amazing album. So, with that being said, I tried to come into this with actually pretty low expectations, knowing that it was pretty unlikely that the band would top their last album in my eyes, it's best to expect the least and be surprised (maybe it would be their best album yet).
When Dead Letters was first released, I know that pretty much everyone was excited and really liked the sound the band took on that track, I can't say I was anywhere near as impressed. From the first time I heard that song to the point when I'm currently writing this review, I still think that song is a mess. To me, it sounded like the band just had a bunch of random riffs and decided to mix them with some mellow parts, I just did not like it and it really did make me wonder about the sound of this album. On my first listen, I have to say, I was incredibly disappointed. Not only had the album failed to live up to the low expectations I had set for it, it didn't even meet the level of the last three full-lengths from the band. I realize that that's a pretty unpopular opinion from what I've seen and heard thus far, but listening to it multiple times now, I can't say I've warmed to it all that much. Every site I typically read reviews from seems to be giving this album top marks, with the exception of Decibel, who gave it a 6 out of 10, who I have to say I'm closer to in this case than I would have liked to have been. Don't get me wrong, I certainly do think the album has gotten better, and perhaps it will continue to grow on me, but I still can't help but feel disappointed by it.
But to actually talk about some of the things I did enjoy about this album. I can safely say that it does sound good, it's nice and polished sounding while being really dark and atmospheric. I don't think that it's a heavier album than Night Is The New Day or The Great Cold Distance, and I do realize that that is perhaps a reason why some people do feel like it's an improvement, though there are still a handful of tracks that do recall similar ideas from the last album. One of my favorite tracks, The One You Are Looking For Is Not Here, definitely sounds like a continuation from the last album while doing something a little different with it. The harmonies Jonas does with Silje Wergeland (of The Gathering) are simply beautiful and the track manages to give me goose bumps every time I listen to it. I should say incidentally, that I do think the first five tracks on here are good and very enjoyable. The Parting and The Racing Heart do a nice job at bridging the gap between heavy and atmospheric sides of the band, with both hitting me on an emotional level that I do look for in music/bands like this. Buildings is a nice and solid metal track that just brings the heavy in a way that is refreshing to hear from the band. Then I think Hypnone is just a solid track, the weakest of the five, but still pretty decent. You have no idea how depressing it is to say that the following six tracks are just dull and feel rather uninspired, in terms of songwriting. I think that the sonic ideas on Ambitions, Undo You, and First Prayer are interesting, but as songs, they're just not memorable. Leech feels like an unfinished song and I Lethean just makes me think of other Katatonia songs that I happen to enjoy more. I asked a couple of people recently a what they thought was worse, an album that you think is bad or an album that you think is uninteresting. They all responded with the latter, and I have to say that I agree, I would almost rather hear Katatonia put out a bad album than one that I happen to think half of is just banal.
I really wish I could give this a really high score because I really want to, I love Katatonia so much and it breaks my heart to have to say that this album just didn't meet my expectations. Like I said above, I realize that this is a pretty unpopular opinion, so feel free to disagree. I wish I didn't have to say this but as of right now, this is probably my biggest disappointment of the year.
Overall Score: 7
Highlights: The Parting, The One You Are Looking For Is Not Here, Buildings
Posted by maskofgojira at 7:11 PM