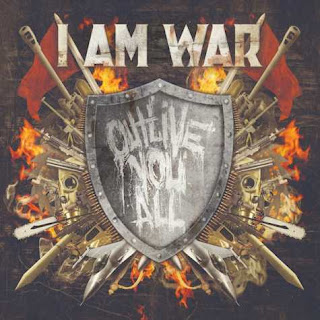 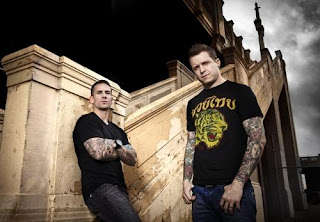 Truthfully, I have no idea why I am covering this. I mean, I like Bleeding Through (though their last two albums have been a bit on the dull side), but I've outgrown my love for Atreyu long ago. I wasn't huge into the single they released several months ago, but here I am, reviewing this anyway.
I know the point of this project was so that these two guys, and maybe Mick Finney (who for some reason has become increasingly involved with these sorts of projects), was to write some really aggressive, energetic hardcore songs. What that essentially means is that they decided to write a bunch of short, pretty fast paced tracks that feature quite a lot of gang shouts, breakdowns, and thrash influenced riffs. It's pretty much the standard of modern hardcore or metalcore, nothing stands out too much. I do understand how this sort of music can make people feel energized and pumped up, but personally, there were very few instances where I felt any desire to get up and mosh, which I'd assume is something that both of these guys had in mind while writing these songs. As the lead vocalist Alex Varkatzas certainly does have a style that is somewhat polarizing. I'd totally understand if someone told me they found his throaty yell irritating, but I was actually quite surprised by the amount of diversity he used on here. Personally, I enjoy Brandan Schieppati's vocal style, his guttural style of hardcore growling is very distinct and whenever he pops up, I do think he reinforces whatever point Varkatzas is trying to drive home with his lyrics. I do think the two work quite well as a pair, a lot better than the single, Bat Out of Hell, had lead me to believe. I'm assuming that since Finney did the production on here, he also helped sample the drums on here, because it's become a problem that is becoming more and more prominent in his recent jobs. The kicks on here sound terribly compressed and mechanical, and while that might not bother some people, I find it to be incredibly irritating since it clashes with the more organic sounding guitar tones. I'm glad it hasn't seeped into Anaal Nathrakh too much as of right now anyway. Seeing that Schieppati did play guitar on here, I think it is worth noting that while none of these songs feature riffs that will surprise you, he knows how to write songs that are direct and to the point. They are metalcore songs, but coming from someone who has listened to a lot of bands, both old and new, I have to at least give him credit for not trying to make this into something it's not. This album is thirteen tracks long and not a single song crosses the three minute mark. These guys aren't out to write something unique or original, this is a straightforward metalcore record, that's it, though I do appreciate the few black metal riffs that pop out throughout.
I have to be honest and say that even though I was skeptical, and that might be underestimating it, this album did wind up impressing me. I don't think this is a great album, but there are tracks on here that quite good for what they are. It's not going to wow you, but if you want to hear some quick metalcore songs, check it out.
Overall Score: 7
Highlights: The Poisoning, I Don't Know Anything, Lead By Liars, My Love Affair With Disaster
Posted by maskofgojira at 9:51 AM