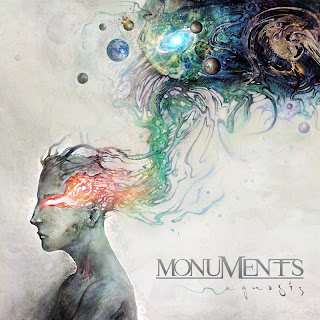 Back in 2008, a band called Fellsilent released their debut full-length called The Hidden Words which was one of the first albums to really show the forthcoming wave of djent. Soon after, the band dissolved and both guitars from that band formed new groups now known as TesseracT and Monuments. After a very long and highly anticipated build up, we finally have the debut full-length from Monuments.
There's been quite a few things that have been holding up this record, which, from what I understand, has been ready since early last year or so, including, but not limited to, finding a new vocalist, which took up the majority of the that time. Enter Matt Rose. I really have to give it to the band because they have taken a shot on Rose filling the spot(s) of vocalist which was previously taken up by two vocalists. So, even if I wound up disliking his vocals, I'd still have to give him props for just filling the space. Luckily, Rose actually does a pretty solid job at filling their spots, actually trumping them in some regards. Previous vocalists, Neema Askari and Greg Pope, were certainly talented, taking the whole SikTh, or Fellsilent to be more specific, approach to vocals where they were both delivering rapidfire vocal lines and bouncing off of each other and occasionally harmonizing, which was cool for what it was. But, I actually do prefer the more direct and singular style that Rose brings to the band, though it did take a little time to adjust to it after getting used to listening to some of these songs with Askari and Pope on them. Hell, Rose channels his inner Jeff Buckley on a couple tracks throughout the album, which I'm more than happy to accept.
As for the instrumental side of the band, John Browne has definitely continued with the sound he helped to pioneer with Fellsilent. What that happens to mean, for those who aren't aware, is that you have very fast, staccato riffs that bounce back and forth between djent rhythms and progressive melodies. These aren't the standard Nothing-era Meshuggah style rhythms by the way, every track on here is fast paced and the rhythms don't stop or give you a second to breathe. Granted, as the record progresses, more space is injected into the songs, which does bring out more melody, ala 97% Static or Denial for example, but even those tracks still have faster sections as well. One of my favorite things about this record is that, in a similar way to that Vildhjarta record that was released last year, it isn't a clean sounding album. For this sort of sound, it's very heavy and punchy, with a pretty clear distinction between crunchy low-end and high-end pristine. I don't know if you could call it raw, but it's certainly not polished to a metallic shine like a lot of other bands. Even if you can't get into the music, I think you have to at least acknowledge the talent it takes to play these songs without making them sound random or chaotic. The rhythm section, and I mean the bass and drums here, made up of Adam Swan and Mike Malyan are more than earning their keep. I actually really like it that I can hear Swan's bass lines consistently throughout the album.
The songs on here turned out a lot better than I expected coming in and it's an album I've found myself returning to even more than I anticipated, both pluses. I'm really anxious to hear where the band go in the future after hearing this. If you don't have an interest in djent or complex rhythms, I highly doubt you'll enjoy this album (maybe I'm wrong), but if you do, you'll get a hell of a record.
Overall Score: 8.5
Highlights: Doxa, Blue Sky Thinking, Denial
Posted by maskofgojira at 2:43 PM