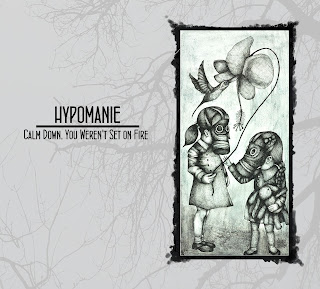 In the world of one-man black metal bands, Hypomanie, despite what a lot of people say, is one of the more stylistically impressive groups to emerge. When the project was first starting out it was much more in line with the depressive trend of black metal that was rather popular in certain circles at that time. Since then it seems that with every new album Hypomanie is moving further and further away from his black metal roots and into something much more in the realms of straight-up post-rock and shoegaze.
I know it might be overly optimistic (that would be a first) when I say that this project is more impressive and adventurous stylistically than other bedroom bands that emerged around the same time, but I think that if you've listened to enough of this stuff you begin to appreciate evolution all the more. I mean, the move from extremely raw and, in my opinion, pretty average depressive black metal into blackgaze isn't a big stretch, tons of bands move farther in between each album, but I admire the desire to change, even if it isn't a big change. The fusion of post-rock with black metal, though referring to this as black metal may be stretching that genre a bit too far at this point, will never be thought of as a new thing anymore, and this is the sort of album that doesn't throw in any new ideas or try and advance the fusion of those two ideas, so don't come in expecting your be blown away. If there's anything stylistically impressive, or individualistic rather, about this album it's that it does try to embrace a little bit more of a post-punk vibe on a couple of tracks, hear Alissa Loves Perfume, which I thought was pretty well done. Most of that sound tends to come through in the warm bass tone, but it occasionally does actually make more of an impact.
The production on here is the best yet for the project, it retains its raw distortion but blends that aspect with the cleaner guitar sound in a more effective way than 2010's A City In Mono did. I'd say that it benefits the songwriting on here in a way that I don't remember there being in the past. There's a much better sense of cohesion between the straight clean moments and the ones where distortion appears, take note that there are very few moments on here where a clean guitar is not the main focus of the song though. In my opinion, if you took out the distortion, this album would probably be just as effective as it is now. Granted, it might not reach as wide an audience since as of right now it can still be called blackgaze, but I think that if this was a straight-up post-rock album it would still work. Even on the album's most aggressive track, Pale Blue, which does contain a bit more edge and bite thanks to the driving drum patterns, it's still hard to call it "metal" beyond it's opening minute or so.
It's a pretty solid album, it's not amazing but for what it is, it is enjoyable. If you've heard a handful of albums from this genre what's on here will not surprise you, but it's still worth a listen if you those sort of ideas. If you happen to dig blackgaze or post-rock you'll probably like this in some capacity.
Overall Score: 7.5
Highlights: Alissa Loves Perfume, Pale Blue
Posted by maskofgojira at 6:19 PM