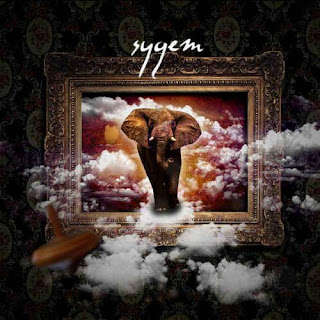 Previous to seeing this album cover on Got-Djent.com, I wasn't aware of this band, despite them apparently being around in some form or another for eleven years now. Despite what you may think, they are not just another carbon-copy djent group, despite what you may think of my previous reviews of bands who come from that style. Needless to say I was quite surprised when I first pressed play on this album.
When I think of a djent band, and I think that when most people think of djent, they think of Meshuggah and the many offspring that they've produced, Syqem are a band that appear to come from a different background. Unlike the many of the typical progressive, or -core depending on the band, leanings that most of these offspring bring to the table, the quartet that make up Syqem take those heavy 8-string grooves and put them into a very modern sounding alternative rock kind of context, fused with a health helping of modern electronica. It's a rather interesting sound because throughout the album you will hear almost no screams, and Daniel Bernath's voice is very striking in its emotive and melodic delivery. I knew it would happen one day when a fad became big enough that a band would have the idea to mix those djenty rhythms with more radio rock, or alt. rock in this case, but I honestly did not expect it to turn out this well done. While I guess saying that this is progressive might be stretching it for some (me included), more reasonable comparisons that came into my mind while listening to this were groups like Deftones, Dredg, and Memfis. I don't know if you could call it arty or experimental, but Syqem definitely have similarities to those groups at their most intense or metallic.
What make this record so striking, in my opinion, is how palatable the band made these songs. None of the tracks on here are all that complex in their structure, most follow a standard verse-chorus-verse sort of pattern, but it never feels boring or recycled. Opener, Attack of The Elephants is a perfect example of what the band can do, striking the right balance between low-end grooves, anthemic choruses, and an overall upbeat mood. That actually brings me to my next point, how upbeat and up-tempo this album is. This is not a dark album, I mean, subject matter is in the eye of the beholder, but musically, I didn't find this to be all that dark or foreboding. It's really melodic and groovy, delivering some pretty well-written, poppy alternative metal songs that are far more appealing than most groups in that genre usually are. Unfortunately, I'm not going to lie and say that there weren't a few things that bothered me on here. While I praise the band's use of electronics throughout, there were some ideas that I'm just not a fan of. I just have trouble finding anything to enjoy in dubstep, so the use of it on tracks like You Phone or Siamese (In Theory), specifically, kind of dampened my reaction to their otherwise extremely catchy and upbeat ideas. Sorry, I just don't dig the wub-wub. I will give it to the former for otherwise having one of the best choruses on the entire album though, I'm a sucker for a good (power)-ballad. I guess I can be glad that they didn't go full-bore with the dubstep metal like Korn recently did.
Perhaps this is a bit too sugary or poppy for some people's taste, but I thought it was a really well-crafted album from a band with a sound that is pretty unique as of right now. It's pretty rare that I enjoy something that has the potential to be this mainstream, but I can't deny the strength of these songs. I think you'll find something to like on here whether you happen to like djent, alt. rock/metal, melo-death, or (imo) terrible electro-core.
Overall Score: 8.5
Highlights: Attack of The Elephants, The Artist, S.O.S.
Posted by maskofgojira at 5:39 PM