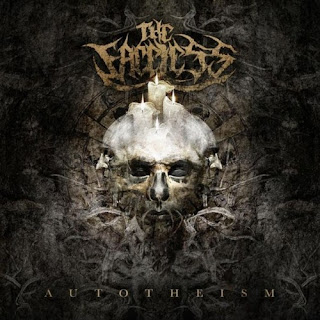 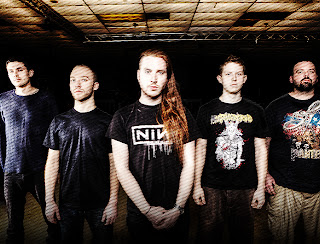 I have to say that back when I was first getting into the whole tech-metal, tech-death to be more specific, one of the earliest groups I remember getting into was The Faceless. I can still remember, very vividly, the day I went to the store and bought 2008's Planetary Duality and as it stands, I still find that to be one of the most memorable albums I've heard from that genre (ever!). Four years, three new band members, and a hand injury later, we finally have that album's follow-up.
Yes, maybe the above statement seems a bit naive of someone who hasn't listened to a whole lot of tech-death (I'm perfectly ok if you think that) but it's a genre that I do have trouble remembering songs from, and Planetary Duality is one of the few albums that I actually can remember songs, not just ideas. But we're talking about this new album. With a four year gap in between albums, expectations were quite high, and personally, I didn't pay a whole lot of attention to the hype, I was going to cover this album regardless of if it was just another tech-death album, a djent album, a deathcore album, or whatever, because I like the band. So, I can say quite sincerely that when I pressed play for the first time and I heard Michael Keene's singing introduce Autotheist Movement I: Create, I was not only surprised, but actually excited for whatever would follow.
It's quite obvious that the band has taken a far less authentic approach to tech-death, because no matter what is said about Planetary Duality, you have to say that it was a full-on tech-death album in the vein of groups like Necrophagist or Spawn of Possession. This is far less of deliberate copy of that style and more of an interpretation of what I can imagine came from groups like Opeth, Devin Townsend, and Septicflesh. There are certain riffs and ideas that you can see a through line from where the band did take their inspiration and how they made it into their own. There are more than a few guitar lines that sound very much Opeth-like, Keene's vocals at times to sound like he has taken inspiration from Townsend, and the symphonic work is very reminiscent of the most recent releases from Septicflesh. Whether or not the band actually took some sort of inspiration from a group like Mr. Bungle or not, Autotheist Movement III: Deconsecrate definitely made me think of them and that did bring a smile to my face. Any reference to that band gets a thumbs-up in my book automatically (whether intentional or not). It's a very noticeable shift, and as I've noticed from my fan's reactions already, there appears to be a pretty decent amount of people who aren't really feeling this new direction. I understand that the shift into a much more typically "progressive" direction might be a bit much for some people who liked the band's rapidfire tech-death approach, but speaking only for myself, I prefer this album to their previous two. It doesn't have any impact on how much I like Planetary Duality, I still like that album, I just like this one more.
In addition to the above, it's not like the band have lost their death metal edge. Geoffrey Ficco is more than a suitable replacement for Derek Rydquist but brings with him a much wider range of styles. He does the typical guttural growls but now there are various pitches of the growl, there are screams, and various other forms of intense vocals. Instrumentally, I'm more than happy to tell you that, yes, I'd say the first half of the album is dominated by more technical-progressive metal that isn't specifically designated to the realms of death metal, the last four tracks (three if you exclude Hail Science) are certainly closer to the band's previous work, at least in my opinion. I'm fine with the band using less typical ideas from death metal just to keep them in touch with the genre, there are enough bands doing that already, I'd rather have a band break out from the genre's confines and do something that makes them stand apart from other groups.
I was certainly impressed with this album and definitely surpassed my expectations for what I thought the band could achieve. This is the band at their peak as of right now, and it will be interesting to see where they go from here. It's not for everyone, but I think that if you're willing to hear a new band's take on prog-death, it's definitely worth it.
Overall Score: 8.5
Highlights: Autotheist Movement II: Emancipate, Autotheist Movement III: Deconsecrate, The Eidolon Reality
Posted by maskofgojira at 8:48 PM