Yep, another split collection. This one focuses on doom metal (of various degress). As always, reviewed from 1-8. 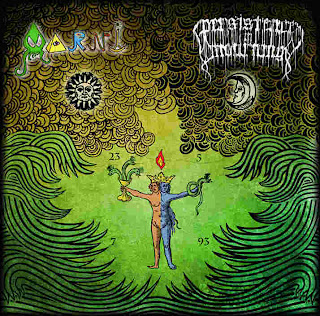 First up is a split I've been wanting to cover for a while now, this new one between Aarni and Persistence In Mourning. I'll just say up front that I've never been huge on PIM's material, it's not bad, it just isn't really my thing, Aarni on the other hand, I really do enjoy, so I'll start with that half first. For those who haven't heard Aarni before, sole member Markus Marjomaa has created a sound that blends traditional doom metal with elements as common as funeral doom and stoner rock to stuff as weird as freak folk and traditional orchestral music, it's a strange blend of ideas but I just love it for how weird it is. Marjomaa has always had this sort of naturalistic sort of approach to atmosphere, making use of field recordings on several tracks while never making them sound too bizarre. I'll admit that there are a few moments on here where it just sort of aimless ideas, Emuu, but when Marjomaa decides to sit down and write a song, he can crank out a hell of a good one, Land Beyond The Night. Then there's PIM, who I've been aware of for a couple of years now, never really got into the project too much, but had heard some pretty good things about it. What struck me was the project's move from sort of quasi-funeral doom into more noisy and mechanical industrial music on last year's Confessions of An American Cult. This release sees Andy Lippoldt bringing five tracks that act as a sort of middle ground between his more doom oriented beginnings and his recent industrial leanings. Having said that, Lippoldt does bring everything from droning doom to phaser-based noise to this release, with each track being a unique experience into and of itself. Both sides are mixed bags when it comes to quality, but I would that every song is at least interesting.
Overall Score: 7
Highlights: Land Beyond The Night, Goetia, Poking Holes In The Sky 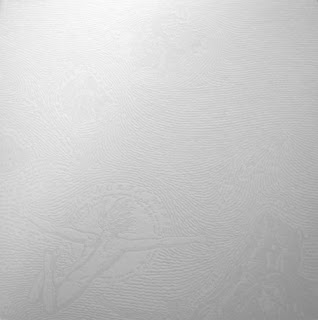 This is the shortest of the three splits here, with each band contributing one track each. Honestly, I can't say I'm all that familiar with either group, I have been aware of them for a while. First up is Thou, who, of the two groups, I knew more about and had actually listened to their material before. On Ordinary People, Thou delivers a pretty standard, for them, blackened sludge track that really has a hefty grunge vibe, which even I know influences them. It's not exactly groundbreaking or spectacular, even for them, but the track has some nice weight that it sort of throws around, which I would say makes it worthy enough to be a part of any Thou fans collection. Hell was a group who I had never listened to before, though I had heard about them and seen the artwork for both their albums around the internet for a while. Sheol is quite the track because it just has this rumbling bass sound that just seems to topple over all the other instruments and a vocalist who sounds genuinely intense about what he's screaming. It's a pretty solid split with two songs I think would fit well in any doom/sludge fan's collection.
Overall Score: 7
Highlights: Sheol 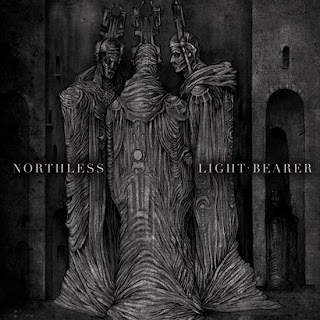 Of the three splits on here, this is the one that featured bands that I was actually familiar with previous releases. I was a fan of both the full-lengths that Northless and Light Bearer released last year and was certainly interested in seeing what each group would bring to the table for this release. Northless bring two songs that definitely bring the heavy. Both of the tracks they contribute are heavy pieces of sludge that contain more atmosphere than I ever expected to hear. They are certainly more riff-based than Light Bearer, so they might be the easier point of entry when listening to this. I especially like the dissonance and harmonies added to For As Long As You Shall Walk The Earth, Your Blood Will Reek of Failure because they do help the track stand apart from being "just another sludge metal song." Light Bearer bring one gargantuan track to the table in the form of the almost twenty-two minute long Celestium Apocrypha: Book of Watchers. The track explores some new ideas for the band, namely the extended drone-based intro to the track, but when it gets heavy, they keep it entertaining. The band kind of channel a little bit of everything that was on their album into this track, so you get the sort of vicious sounding doom metal parts, the post-metal builds, as well as a little bit of chanting. Both bands deliver solid tracks that definitely are worth checking out if you're a fan of the slower breeds of metal music.
Overall Score: 7
Highlights: Celestium Apocrypha: Book of Watchers
Posted by maskofgojira at 3:29 PM