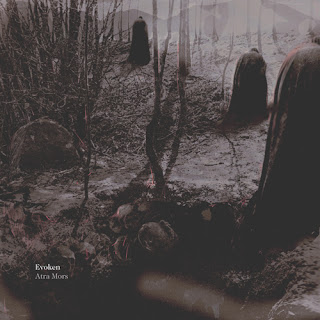 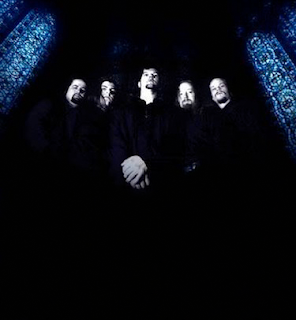 I have to say that when I was first discovering funeral doom several years ago, Evoken was one of the first bands I got into. I feel like they may have even been the first or second, but I'm not completely sure. But I do think that it's great to wind up hearing new material from them on a label like Profound Lore, who will give more exposure to these titans of doom.
In the pantheon of great funeral doom, Evoken are a band who have made their mark a while back with 2005's masterwork, Antithesis of Light, but have never been a band to simply rest on their laurels. Throughout the band's history, they've managed to make each recording slightly different, either through sonic experimentation or just production, enough to make every recording stand on their own without sounding too much alike, and let's face it, being a funeral doom band, a lot of your songs are more than likely going to sound somewhat similar anyway. In the past the band has worked with more traditional death/doom on their early recordings, hear their 1994 demo Shades of Night Descending for the most clear appearance of those ideas, some of which made it onto their 1998 full-length Embrace The Emptiness, as well as the occasional gothic and symphonic ideas as well, which were clearest on their 2010 split with Beneath The Frozen Soil. This release sees the band stripping their sound back to basics, delivering a powerful, if a bit unremarkable, funeral doom record. I don't mean for the term unremarkable to be taken as a bad thing either, but this is the band somewhat returning to the blueprint for what the genre sound is at its core.
While I enjoyed the more pristine and fuller sounding production on the Beneath The Frozen Soil split, and was a bit put off by the more stripped down sound of this record, by the end of the first listen through I had gotten adjusted to it. The recording is very thick and dense sounding, even with all the reverb on the drums, and is sort of a tough nut to crack at first, but the melodies performed on here do make it a bit easier. I will say that given this more primal sounding recording, I'm not sure if you would want to call it that, I do think that it was a wise move for the band to explore more melody on here than I can remember hearing from them. Whether it happens to be the slow-build of An Extrinsic Divide or the more seismic crush of a track like Grim Eloquence, which has a great bluesy solo near it's conclusion by the way, the melodies serve somewhat different purposes all that while still keeping the band firmly within their own sonic realm. Hell, even the old-school death/doom side of the band comes out on The Unechoing Dread, which, quite frankly, is refreshing at that point in the album, because even I can only take so much of slow paced doom. It's just a nice change of pace to have a track that has a bit more groove to it, something that is rarely heard within the funeral doom genre. Along with that, and I will say that I have only listened to this album a few times so far, but it does get better with every listen. I wouldn't say it's a grower, but I do feel like parts just stick with me more each time I listen to it, and I have to say, it's perhaps one of the few times a funeral doom album has made me want to return to it, rather than me returning to it simply to remind myself of it.
I think it's a really well crafted funeral doom album that shows the band at what might be their most accessible while not really changing their sound. I think this is a far better album, for Profound Lore, than that Aldebaran album they released. Evoken are easily one of the most respected groups in funeral doom, and with this release they continue to impress. If you happen to be a doomophile like I am, do yourself a favor and listen to this album.
Overall Score: 9
Highlights: Atra Mors, An Extrinsic Divide, The Unechoing Dread
Posted by maskofgojira at 10:53 PM