A Forest of Stars - A Shadowplay For Yesterdays (2012) 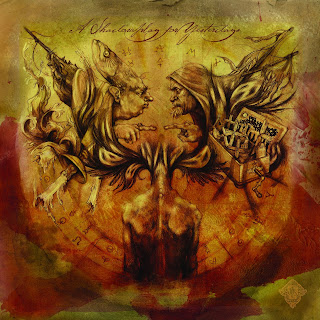 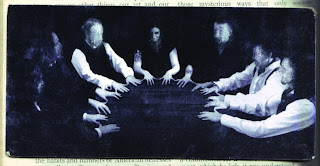 As much as I like to think I have diverse tastes, I am pretty predictable in regards to what I like. If I happen to see the words "psychedelic", "progressive", or "avant-garde" next to the black metal genre, no matter what the band is, I will check them out. That's how I first heard of AFoS a few years ago with their first album.
As anyone who's listened and read an interview with AFoS before should know, they're weird people. They're one of those bands that you either actually like because of how left-of-center they are or one of those bands that you pretend to like and show off to your friends and other people in order to show them how weird and experimental your tastes are, or you just don't like them. I guess it's a good thing that most of the people I know who actually know the band do genuinely enjoy them and all their extravagant forms of madness because this album is probably their most diverse as well as their most accessible release yet. If only because there's only one song on here that actually crosses the ten minute mark that makes it more accessible, but there are a couple tracks on here that could be appealing to people who just like folk metal or psychedelic rock, in addition to us weirdoes who enjoy the rest of it.
The band have always experimented with the fusion of black metal, psychedelic rock and folk, neo-folk, and other styles, but on here they really just throw everything at you, and they're not pulling any punches. I somehow doubt the band intended any of this to work on a first listen, I mean, within the first two tracks you have more ground covered than most bands ever do, opening with spoken word and found sound samples on opener Directionless Resurrectionist before transitioning into Prey Tell of The Church Fate which is one of the most perfect blends of psychedelic music with black metal that I've ever heard, fusing blasting black metal sections with melodies that are more neo-folk sounding than most metal bands but have it work so well is just mind boggling. But it's on that ten minute track, A Prophet For A Pound of Flesh, where, I believe, the band are at their best. It's easily the best fusion of black metal, krautrock, neo-folk, and psychedelia I've ever heard. The band move from section to section in ways that aren't jarring or odd, though you'd think that fusing all those ideas would lead to at least a little bit of that, but they do it so naturally, it really is worthy of praise.
With all that being said, I can't deny that the band do have trouble balancing their ideas with the following three tracks. While I have no problem with the band having the band focusing on more of their black metal side on a track or more of their psychedelic and folk on another, I did find that there were some tracks where my attention did drift away from what was happening. I would never say that a track on here is bad, but they don't really live up to what the band presented up-front for this album, and luckily, they do bring themselves back on track on Gatherer of The Pure. They bring back that sense of oddity and psychedelia that the three tracks before it were missing. It's that sense of classy, but totally retro and weird, atmosphere that makes the band who they are and makes them entertaining, and those three tracks (four through six if you didn't get that already) just didn't have enough of that for my own tastes. Even when they do completely instrumental tracks like Left Behind As Static for instance, it works so well because the band are fusing ideas that are interesting and it doesn't sound like anyone else. They don't need the over the top vocals to convey their originality, it's how they take these ideas from various genres and give them an atmosphere that is retro, classy, and modern that gives them their sound. That's what makes them unique, and that is what makes them great. (I do realize I got a bit sidetracked in this last paragraph, but I think it still works)
Even including the three songs that I wasn't too fond of, I still think this is a really great album and easily the band's best. I think that if the band continue on improving as they have, we'll have a masterpiece really soon from them. This is a must for all fans of weird black metal (like myself), do not go through the rest of this year without hearing this.
Overall Score: 9
Highlights: Prey Tell of The Church Fate, A Prophet For A Pound of Flesh, Left Behind As Static
Posted by maskofgojira at 1:45 PM