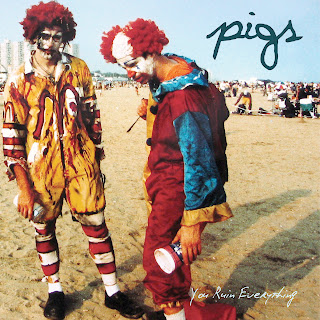 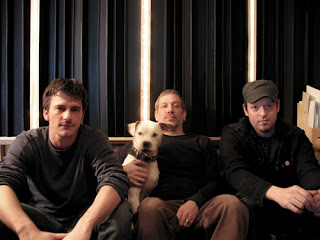 Time for something a bit less metal. Having received this a couple of months ago, I've been on a more rock kick as of lately so I finally decided to cover this. I have to say, I'm a little surprised that there isn't a bigger band named Pigs already out (I know there are others with the name though).
It's hard for me to hate noise rock especially when it owes a debt to the likes of hardcore and punk as much as to blues and garage rock. Its simplicity and dissonance are things that make it hard for me to hate it. I'm a guy who's happy when I listen to a melo-death album and there are great twin-guitar harmonies going on, but I'm just as happy if you give me a band who play with dissonant sounding riffs as well. Noise rock tends to favor the ladder over the former, and for that I'm glad, because it brings some much need flavor to an otherwise rather bland style because for every band who actually embrace the harder edge and energy of punk music, there are dozens more who are just dull and lifeless imitations of pop music, but rawer. I just want something authentic and vibrant, it doesn't have to be done by young guys (or girls), as this band shows, they're not fresh-faced teens, they're older guys, but they know how to, and when to, play intensely and when to keep things withdrawn. Being vibrant doesn't have to mean the whole thing is like a grindcore album, but it has to have energy exuding from it, whether it is in the slower, sludge-based moments or during the dissonant punk ones.
This isn't a particularly long album, and frankly, none of the songs are that long. Speaking as someone who does enjoy long songs, I actually do not think that that fact hindered the album at all. The band's strength is in the way they can cram your face into the dirt. Whether it happens to be fast and hard, opener Give It, slower but more painful (I'll leave it up to you whether you believe that's better or not), Scrum, or more intermediately, Outburst Calendar. With that being said, it's pretty rare that one song will really mirror another's in terms of intensity, while the opening three tracks are certainly the most in your face and abrasive on the entire album, the following eight that follow them are much more varied in those factors. I actually did find that to be a good thing when it comes to the album, each track is performed like I'd imagine it being done live, though the production is definitely clearer than it would be live, it has that spark, but it none of it feels redundant. I do think it takes skill to be able to make even the calmer moments on the album, Small c Celebrity containing some of the most obvious, contain some small inkling of fire, like the band could just go full bore any moment.
While I can't say much in the realms of originality for the band, what I can say is that it is an enjoyable and fun listen. Albums like this aren't something I come into expecting the world of, but they do usually provide me with some of the best songs I hear all year, and this one is no exception. If you just want an album to speed to or to perform other questionable activities, this should be someone on your playlist.
Overall Score: 8
Highlights: Whitewash, Outburst Calendar, Mashantucket
Posted by maskofgojira at 11:31 PM