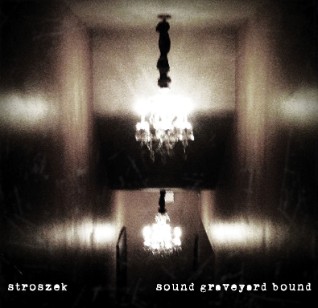 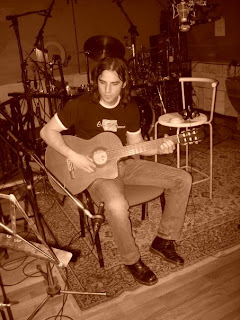 I've been familiar with Claudio Alcara's solo project Stroszek for quite a while now and am certainly well aware of his mainstay band Frostmoon Eclipse, but this is the first time I think I've actually heard an entire album from Stroszek. I knew from the other songs I had heard that it was more of a singer-songwriter type of a vibe, but beyond that I didn't really come in expecting too much. Believe it or not, I was actually quite excited to finally listen to this (I say that because it's not a metal album).
Make no mistake, I am a big fan of music like this, singer-songwriter style material, but what was on here was a lot different than what I remember hearing from the project. What I kind of imagined was Alcara and a guitar, maybe some keyboards or some additional instrumentation, but no, this sounds like a full band playing. It sounds like a full on folk group, and none of this up-tempo party folk, but solemn and slightly depressing sound folk rock. When this thing introduced an electric guitar I was really surprised because it, once again, did something that I did not expect to hear, call me unprepared. Maybe I misspoke when I said that this is folk rock, because the rocking parts owe quite a bit to Alcara's metal background. The album is for the most part pretty mellow, even with the more electric dominated sections of songs, you'll never burst out into a full-blown rock chorus or a really heavy riff. There are riffs, but they're not really the type that will make you want to headbang, but the type that enhance the overall mood of the album, they'll usually still be backing up an acoustic guitar or there will be a great bass-line plodding along underneath it. The only time when the record actually became what I thought it was going to be is on the closing Mike Johnson cover If The World Handn't Gone Insane.
Believe it or not, I actually found a lot of the more mellow, or acoustic rather, sections of this album to be more memorable than their heavier counterparts. Maybe it's just because I haven't really been listening to too much heavy music as of lately or something that I found those moments to pop out more. That melancholy really just feels so natural and true, unfake is what I'm trying to say, and while that might not be the most enticing thing to say, it's what drew me in and kept my attention. Alcara's vocals also don't do anything to help brighten the mood either, staying with a rather monotone style of singing that really doesn't convey a whole lot of emotion, but manages to fit the instrumentals perfectly. I realize that the nature of these vocals won't please everyone, monotone sort of vocals obvious are kind of hit-or-miss for a lot of people, but I think that with the nature of this record, a lot of people will more than likely get over this problem.
Whether you happen to enjoy more folk rock sort of stuff or singer-songwriter albums or even straight-up metal, I think that you'll find something on here to enjoy. It really is an album that does have a pretty wide sense of appeal to it, despite how melancholic it is. It really surprised me and it's an album I'll definitely be returning to again for quite a while.
Overall Score: 8.5
Highlights: Shipwreck, Self Closure, Crows
Posted by maskofgojira at 9:37 PM