You know the rules by now, the fourth edition of this split based series. Focusing on some interesting black metal releases for this one. All reviewed from 1-8. 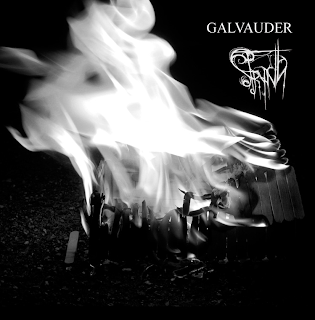 What we happen to have here is the debut release from two brand new projects. First up we have Galvauder, a one-man band from the same guy who also produces material for Échancrure. Personally, both projects are both new enough to where I think A. could have kept the two a single project, but that's beside the point. The two songs he contributes here are some interesting though not all that different to what he's put out with Échancrure (when he does black metal anyway). While Les Échos De Vos Choeurs is a great and interesting piece of Ved Buens Ende and Blut Aus Nord inspired black metal with jazzy bass lines, dissonant and winding guitars, stuttering electronics, and distorted vocals, Mes Gniardes... Je Vous Dégueule... is a much more of a "progressive" piece, which, while carrying similar sounds, is a lot more frantic when it's blasting and more moody and jazzy when it calms down. Then you have Strynn who, when I first saw their band photo thought they would be doing more of a blackgaze sort of sound, instead, deliver a far more traditional and raw style of black metal. Despite still making use of melodies, it becomes apparent that the band are more focused on the more on the fury and intensity of the genre than trying to really add anything to it. It's fun, nothing too special, but it's quick and easily digestible. Both sides are pretty far apart in their approaches to black metal, but both pull them off rather well for a debut release.
Overall Score: 7
Highlights: Les Échos De Vos Choeurs, Destroy to Rebirth 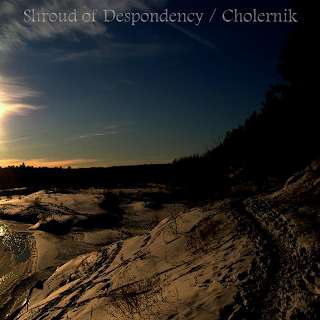 First up we have Shroud of Despondency which, for the purpose of these recordings, returned to, essentially, a one-man band, founding member Rory Heikkila. Though he did bring in assistance from current vocalist Ron Blemberg and Jon Liedtke as well. The material on here is a far more primitive sounding recording with songs feeling more raw and visceral than the more atmospheric and progressive material on previous full-lengths. In fact, these songs wind up sounding like a really odd take on death-doom more than black metal in quite a few spots on here. It sounds like a weird mix of old Cryptopsy and early Katatonia, maybe a little more black metal than that, but surprisingly in that ballpark, and it's pulled off pretty well. Shapes is also one the best songs the band has ever churned out. As much as I like Shroud of Despondency, bassist Tyler Okrzesik's solo project Cholernik is a project that I have several reservations about. Many of my problems with the project happen to stem from the one fact that it is a one-man band. Now, don't get me wrong, as a guitarist, I think Okrzesik has some pretty interesting ideas, he's definitely doing more of the Krallice kind of style, though with his own personal flair added, but because of the fact that he's alone in crafting these songs, a lot of them wind up being fairly lengthy, like Krallice songs, and very self-indulgent, unlike Krallice. In addition to that, from the records I've listened to from the project, he's made use of a drum machine, and it has some absolutely annoying cymbal work which just aggravates me to no end and actually gives me a headache. While it does appear that since he's started using vocals, he's stopped noodling as much, I still think there are just too many problems in his style for me to say that I really enjoy it.
Overall Score: 7
Highlights: The Echo of Depletion, Shapes, The Warmth 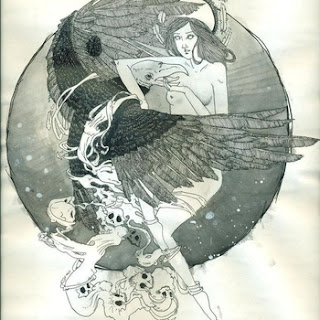 Here's a split that I was a little anxious about. I'm a big fan of Cara Neir (last year's Stagnant Perceptions album was in my top 50), but my review of Ramlord's demo has become quite the topic for those who've read it because I wasn't really into it. To focus on this release though, what Cara Neir bring to the table is probably some of their most "traditional" sounding material yet, though I guess you could never really call anything from the band standard or unoriginal, the riffing on here is the most reminiscent of classic black metal that I have heard from them yet. You still have your spasms of grind, post-rock climaxes and clean passages, and crust punk attitude, but it's a little less abstract, at least to me, and a little more direct. From Ramlord, whose raw approach to black metal and punk really hasn't shifted too much from what I can tell from their demo, production wise anyway. The track is noticeably longer and features a much more developed sense of song craft making use of dynamics that did make their song far more interesting. Having said that, I still couldn't get into it and it just left me feeling nothing. I would have liked to have told you this was a great split, but Ramlord once again fails to impress me. Cara Neir is great though.
Overall Score: 7
Highlights: Cradled By Apathy, Wilted Blue
Posted by maskofgojira at 12:50 AM