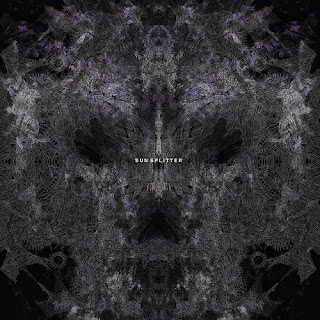 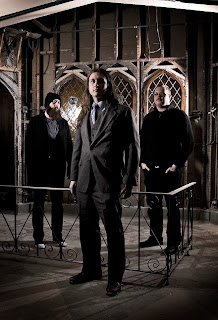 Industrial metal is a sort of tricky genre to really listen to (at least for me). While there are plenty of bands doing it, I rarely come across a band that does anything worthy of merit with the style. I first found out about Sun Splitter last year through a review of their split with Bridesmaid and that's where the above comes into play.
I wasn't really sure what to expect from a Sun Splitter full-length album because I still haven't listened to II as of yet so I came into this after hearing, essentially, one song from the band. Their brand of industrial metal was something that really recalled the way the genre used to sound, in a good way, and make it sound fresh and modern in ways that I haven't really heard other bands do it today. There are clear nods to the likes of Swans, Godflesh, and Circle. Now, one of the things that's hurt quite a few albums for me is the use of programmed drums. Personally, I don't like super triggered, clicky sounding kicks or ear-piercing cymbal work, and though the latter doesn't appear on here, and the band's other material, they didn't really both me all that much. Because I know that this is supposed to have that industrial sound, that mechanical rhythm that just moves forward without any human limitations or restrictions. Sure, I do find the overly compressed sounding kick to be a little bit grating at times, hear The Serpent's Golden Death, but surprisingly, I didn't really mind it all that much on here.
It might just be me, but it took me a while to really get a feel for the vocals on here. I remember the first few times I listened to this I was like, "Ok, it's good, but I thought the band had a vocalist," and was scratching my head because I could only make out the vocals on two tracks. It wasn't until recently that I was finally able to make out the screams, wails, and roars from underneath the heavy rhythms and drones. Maybe it's just my fault for not listening hard enough, but the fact that they are distorted and actually blend in rather well with the rest of the band can make them a little difficult to make out at times. What the rest of the band is doing though is really where things get interesting though. This is certainly industrial, I'm sure I've driven that point home by now, but there's so much more to this as well. There's so much depth in the much, as well as the various other ideas that seem to come in from doom, drone, post-punk, no wave (thanks Jon!), and krautrock. It's all blended together into this murky cloud that is engulfing but not overwhelming (on record anyway). The pumping grooves that are just churned out on here are hypnotic while still being heavy and making you want to bob your head along with them, Into The Broken Lands being the prime example. Other times the band does burst out into a more aggressive riff that is more driving and, let's say, more metallic sounding, and while I would say that it doesn't hold the same impact the more groovy tracks do, I welcome the change and adaption to the quicker pacing and riffing. As a whole, it's robotic enough to feel mechanical and have great rhythms but is also organic enough to feel authentic and live sounding.
Overall, it's a very enjoyable release that is far better than I expected it to be, definitely a welcome surprise. This was definitely enough to make me into a fan and makes me want to look into the band's past material as well. I highly recommend this if you want to hear a band actually do something worth hearing in the industrial metal (among others) genre.
Overall Score: 8.5
Highlights: Parasitic Machine, Two Cold Oceans
Posted by maskofgojira at 11:06 PM