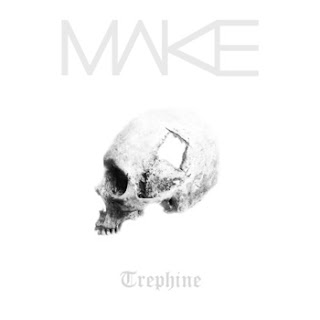 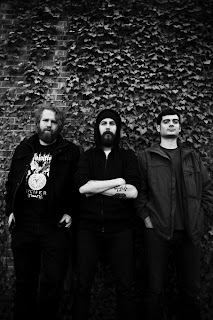 I can't say that I was familiar with MAKE before being sent an email by Devouter Records. The comparisons to the likes of Isis, Earth, and Horseback definitely caught my attention and made me take notice of the band. Even without hearing any of it yet, I knew that I would enjoy this album.
I've said before that I don't really dig sludge or stoner metal because a lot of it just sounds too similar for me and there aren't as many bands branching out and doing interesting things with the genre, so it's always great when I finally do hear a band that is doing that. Much like the bands I mentioned above, MAKE takes various ideas and blends them into a style that is true enough to the standards of stoner and sludge to keep it appealing to fans of that style, but unique enough to have fans of other genres get into it as well. Personally, I kind of view this as a more metal version of what Jenks Miller has been doing in Horseback. You have long and winding blues riffs that just cycle over and over while the rhythm section just lays on a groove until the whole thing becomes hypnotic. In addition to that, there's also that whole post-metal, or post-rock, portion of the band's sound which does add just a touch more color to their already great sound. While using it as more of a transitional aspect to their sound is all well and good, I thought it was a really smart and good idea to let that ambiance seep into some of the more groovy moments on here as well, hear Returning to The Ruins of My Birthplace for an example. You'd think that a band playing a style that I don't really care for normally that has some pretty lengthy songs (most are around six minutes, if that's lengthy) would get boring, but no, these guys manage to keep my attention fully for pretty much every track on here. It has everything a fan of psychedelic rock/metal could want and is a welcome addition to any psyche fan's collection.
While I think what this band is doing is really great, I have to say that while I was impressed by most of the record, there were some tracks that didn't exactly wow me. At first I didn't really like the clean vocals on here but they did grow on me so I don't really view that as a fault. Probably the thing the irked me the most was the fact that the band closed the album with a lengthy track but spent several minutes in silence leading up to a "hidden" track, and I never enjoy that on an album. It kind of disappointed me because when I saw that closer I thought, "Great, I get to hear the band jam out for twelve minutes," which I honestly believe would have been great, but the song is only around six minutes, so that was kind of a bummer. I also think that Valhalla might not sit well with some who would happen to want more of a straightforward song, because that song is a bit more on the psychedelic side of things. Personally, I think it's a really good jam out that displays a lot of character, but that's just me. I actually think that a bit more of that psychedelic influence could have been injected into some other songs on here and would have actually benefitted them. As you can probably assume, most of these are just small things that really don't impact my overall enjoyment of the album and are more things that I kind of wish there was more or less of, I'd imagine future recordings will only improve on these things.
I really did enjoy this album and it's really become a favorite of mine, I spin it pretty regularly at this point. There are a couple things I might tweak about it, but overall it's just a really enjoyable listen. Definitely check it out if you happen to enjoy the more psychedelic side of sludge and stoner metal and rock, you will not be disappointed.
Overall Score: 9
Highlights: ...And Time Came Undone, Valhalla, Scorched Sky
Posted by maskofgojira at 9:46 PM