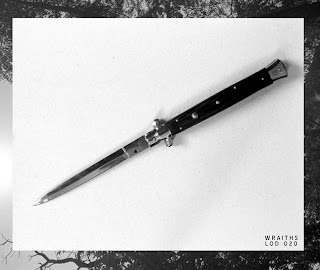 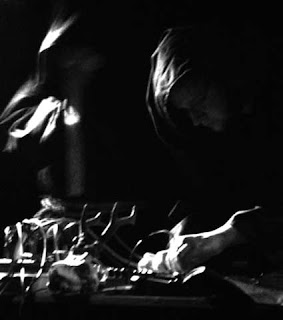 I've only recently become familiar with Wraiths, both through this release and the collaboration they did with Pyramids, so very recently actually. I've heard good things about the band for a few years at this point but never really looked too much into them before getting this tape. Along with a handful of other more likeminded artists, I've been trying to become familiar with the older material in Wraiths discography.
I guess based on what the other tapes that Land of Decay had released at the same time as this one, I kind of assumed that it would be a more noisy affair, and I can say that I was both correct and incorrect. Sonically, yes, these are noise pieces, but they're also so much more. The two improvised sets/pieces certainly reflect an overall dreary, and at times dreadful, mood that I can certainly imagine while they play in the background. The wall of warping noise accompanied with screeching industrial feedback certainly does paint quite a picture. When it comes to improvisation, at least for myself, I find that it either works because a piece is able to maintain a similar flow despite various shifts in tone and mood, among other things, throughout, or it doesn't because the artist(s) keep moving things around which makes it hard to follow anything in particular. This is more of the former, though I'm not going to deny that some people may say it's of the latter. While I personally found Edinburgh the better of the two because of its consistently melancholic mood and almost ambient kind of approach, I certainly respect the more noisy approach taken on Glasgow. Both tracks are absolutely drenched in reverb, whether or not this came naturally from the room they were playing in or was later added in post-production, it definitely works to the advantage of the tracks, adding a bleaker sense of roundness to them.
I really enjoyed this tape and it does what all good first introductions should do, make me want to hear more. These guys certainly know how to make a show sounding interesting, at the very least, and it makes me interested in seeing them play live as well. Definitely worth trying to find a copy of if you're into more droning forms of industrial and ambient music.
Overall Score: 8
Highlights: Edinburgh
Posted by maskofgojira at 12:13 PM