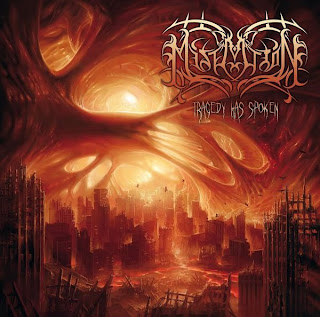 I've been a huge fan of Christian Älvestam since I first heard him several years ago when he was still in Scar Symmetry. When it comes to various forms of death metal, he is truly one of the few vocalists to really carve out a sound for himself. While Miseration has never been one of my favorites from him, I always enjoy a new album with him on it.
Now, if you haven't already figured out that this band was never a vehicle that was specifically dedicated to melody by now, I really don't know what to tell you. Sure, the debut was certainly more in the vein of traditional melo-death and had its fare share of Scar Symmetry-ish moments on it, but 2009's The Mirroring Shadow was a far cry from being a melodic album. That album took a greater leap into the realms of technicality and brutality in favor of the more melodic sides on the debut. Personally, while that album did take a little while to grow on me, it's still not a great album, not that either of them are among the best things I've heard from any of the band members to be honest, though they have their moments. With all that in mind, I can't say I was too excited to hear this album. It wasn't until I had read a review for the album that said the band brought back some more melody and expanded their sound a bit more that I decided to give it more of a chance.
Ok, so maybe I read a bit too much into that review, but taken on face value alone, this album is certainly more melodic and a lot less of a tough swallow than its direct predecessor was. The focus is certainly still on writing songs that are on the more intense side of the death metal spectrum but there are injections of more melody, atmosphere, and stronger dynamics as well thrown into these songs. I guess it's worthy of note that while clean vocals have returned on this record, they were certainly not what I was expecting and I doubt many will welcome them warmly upon a first listen. The few tracks that feature his cleans aren't what most fans have come to expect, they're not the soaring tenor choruses that have made his vocals so renowned. What you get on a track like On Wings of Brimstone, and a little bit on opener Stepping Stone Agenda, are lower, almost choir-like harmonies that still work on the level that their memorable and really catchy, but they're sure to throw some fans off. This is mainly a growl fest, with easily his best exhibition of his range in that department yet. Honestly, on the instrumental front, there isn't too much on here you haven't heard before on another modern death metal album. You have your nod to black and thrash metal, as well as the polished and streamlined production that just sort of cleans everything up (you decide whether or not that's a good thing), but it isn't anything special. There's also this weird industrial glass sound that is used throughout the album, and while it isn't really bad, when I heard it, it just made me think why the band was using it repeatedly throughout the album. I'd imagine that they could have found various other sounds to use instead of that one to make a track work. Maybe it's just a cymbal, but if so, it just kind of sounds weird and modified.
It's nothing special and even though I didn't find it nearly as boring and patience-testing as their last album was it's still nothing to go crazy over. Personally, I still prefer Älvestam's work in Scar Symmetry and his more melodic projects, but for what this is, I don't have a whole lot to complain about it. If you happen to like modern sounding death metal with some inklings of other styles and whatnot, you might enjoy it, but I doubt you'll call it amazing or anything like that.
Overall Score: 6.5
Highlights: Ciniphes, On Wings of Brimstone, Waylayer
Posted by maskofgojira at 10:53 PM