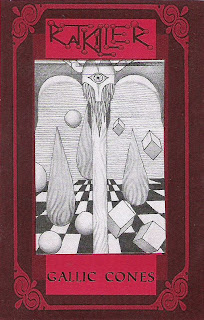 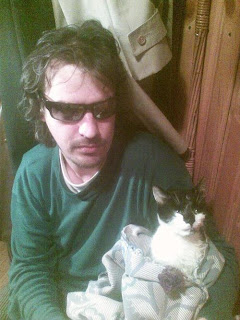 This is the sort of album I didn't think I'd ever really cover, stylistically I mean. The label happened to let me know that I was welcome to check out any of their releases and this one seemed like the most recent (at the time) and one of the ones that was a bit less abrasive to my ears, so I thought I'd give it a shot. Nevertheless, first impressions are more often incorrect.
Obviously, I'm certainly familiar with electronic music but this is something I can't say that I've ever listened to before, by choice anyway. I haven't listened to any of the other releases under this project but this album is just full of ideas that are strange and weird. It's a very varied album in terms of it's style, because you get everything from synth odyssey sort of stuff to straightforward synth-pop and even stuff that sounds like it could've been in an 80's B sci-fi movie but it's all been recorded in this lo-fi way where there's a whole bunch of hiss, buzz, and noise in the mix of this as well. While none of what's on here is in any way bad, I do find this to be a rather taxing album to listen to straight through. When I try and listen to this thing from start to finish, once I get to track three I can already feel myself growing tired of what's happening. Along with that, I honestly don't think that a lot of these songs really do a whole lot, and I don't mean there isn't a lot going on in the song. There's a lot to find in these songs rhythmically, along with subtle electronic touches that pop up here and there, but all of it doesn't really accomplish much. If you listen to one song on here, you've pretty much heard them all. Most songs tend to just kind of run in a circle for a few minutes and then end without ever accomplishing anything.
It's decent, but frankly it's not something I could see myself returning to again. They're ok poppy synth tracks that I could see fans of more lo-fi electronic music digging on, but it really isn't for me though. If you happen to enjoy some experimental synth music I do think that this is worth checking out, but I do think that it's more of a niche sort of album than anything else.
Overall Score: 5.5
Highlights: Inhuman Power By Magic Potion, S.P.Q.R., The Bard, The Druid & The Headhunter 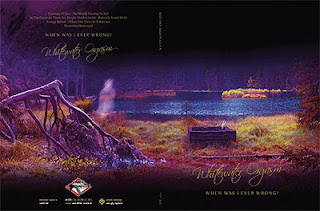 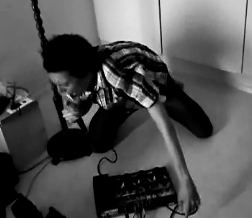 This is yet another album I never thought, stylistically, that I'd ever cover either. I usually leave power electronics up to people who know what they're talking about, but someone told me that they were interested in what I thought of this album since it features a member of a group called Canine Court One, a group whose debut album I covered last year. Not that I was all that fond of that album either, but I was willing to see what this one had to offer.
While I can't promise that this will apply to everyone, when you start an album out with a blast of high-pitched feedback that is ear-piercing (and that's putting it lightly), it's a pretty good sign that the album will not win you over immediately. Honestly, that opening to The Fountain of Fox is easily one of my least favorite introductions to an album EVER, for me, it totally ruins any good will that I might have come into the album with. I can deal with noise, but I don't want to have my ears ringing/bleeding when I press the play button to turn that damn thing on. Luckily, the album does pick up after that atrocious opening, though I can't say that quality ever becomes great, most songs tend to range between decent and average to dull and uninteresting. Now, it's not like the whole thing is worth avoiding, in fact, nothing is, but chances are that if you're a fan of this style of music, you've heard most of what's done on here before anyway. Having said that, I can't say that I was engrossed enough in the first half of the album to care much for the thirty-six minute long closer, Memories Destroyed, which is just way too long and doesn't accomplish nearly enough to justify that length. I'm not saying you won't find change in the track, but none of it is interesting, engaging, or powerful enough to draw, at least me, in at all.
It's solid enough, I've certainly encountered worse, but like it's more metallic counterpart Canine Court One, it's just meh in the end and nothing to get worked up over. It's one of those things that I could see people checking out just so they can show their friends that they listen to really obscure music, more than someone genuinely liking what this is for music's sake, but that's just me. If you happen to be a mongrel for noise and punishment, check it out, but otherwise you can stick with your own obscure noise kings.
Overall Score: 5
Highlights: The World Turning to Salt, In The Canisters There Are People Hidden Inside, I Have Her Torso In A Suitcase
Posted by maskofgojira at 1:52 AM