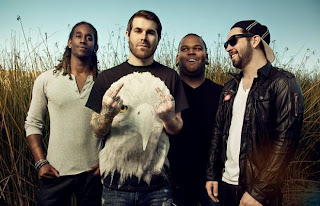 As most people probably know, I don't cover too much metalcore, with good reason that a lot of it is trite and boring. Once in a while there'll be a band that I like or that seems interesting to me and I'll check it out and potentially cover it. This is one of those cases.
I'm sure there are some who are probably curious as to why I'm covering this and to put it rather bluntly, I do enjoy the main bands, or ex-main band, of two of the members. I really do like The Tony Danza Tap Dance Extravaganza, and Joshua Travis' guitar playing is what first made me check this band out, and I was a fan of Sky Eats Airplane, which at one time was Jerry Roush's main band. Both bands do/did things with deathcore and metalcore, that I think were interesting and made both bands stick out from their peers. Though it was mainly Travis that made me interested and caught my attention, I do think Roush has a pretty solid voice for a modern metalcore vocalist and certainly doesn't sound as feminine as a lot of other metalcore vocalists his age. Aside from that, hearing opener White Flag when it was first released did grab me as being a pretty solid modern metalcore sort of song.
Travis brings a very different sound to this band than his main one, though he still hammers home with the low-end, I believe he's using a nine-string on here, but other than that fact, his performance is far less spastic. He brings the grooves and heaviness, If He Dies, He Dies for instance, but it's a far more restrained and toned down performance, reigning in his knack for over-the-top, technical riffing in to allow Roush's vocals to take the lead. It might not be what all TDTDE fans might expect to hear from him, but he gives a solid performance as a supporting man on here and still manages to give the record his own stamp. I also do think that Roush delivers a pretty solid performance as well. Like I said above, his voice does stand out from many other vocalists who started around the same time he did. I know the style of this sort of vocalist isn't going to be everyone's cup of tea, but if you can get past that, I think that it can be agreed upon that he does do a pretty good job on here. Having said that, aside from the fact that I think Roush is a pretty decent vocalist and that Travis brings a much needed breath of fresh air into the metalcore genre with his guitar playing, this record isn't anything all that special. A lot of these tracks kind of just went in through one ear and out the other without leaving much of an impact while others were just too underwhelming for my own taste, Fall In Style or All Along to be more specific. While I enjoyed a handful of tracks on here, none of them were so amazing that it made me forget the rather inconsequential ones. I don't mean to disregard the other two members of the band, but I can't say that Chad Hasty really did much to stand out all that much on here and Travis Sykes didn't really have any impact on the music until Memorandum, and by then it was really too late to really make much of a difference.
If you happen to have never explored outside of metalcore or deathcore, you might think this is the best thing out there or whatever, but coming from someone who already went through a metalcore phase, this just isn't anything all that special. Taking the handful of songs I do enjoy and stacking them against the ones I'm impartial on, I think results in a decent, but rather underwhelming record. Metalcore fans, definitely check this out.
Overall Score: 6.5
Highlights: Ivy & Wine, Counting Sheep, Memorandum
Posted by maskofgojira at 11:49 AM