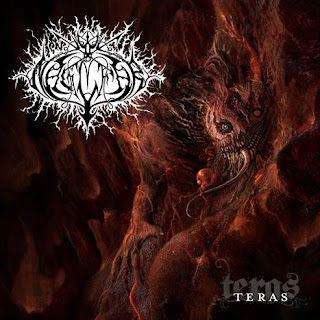 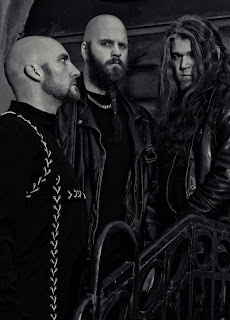 Looking back about five years ago, I really wasn't too big into black metal. I liked some of the bigger and more standard bands, but anything that didn't have clean vocals or featured a lot of blasting, I just wasn't into. I remember buying some video compilation and a Naglfar video happened to be on it, and I was totally blown away by it (but not in a good way). It took years for me to finally grasp Naglfar.
I'm not going to say that Naglfar has since become one of my favorite black metal acts, but I can say with certainty that I do enjoy their albums. It was a little surprising to find out that this was their first release in about five years, I had always thought that they had just been releasing stuff on a regular basis or were touring a lot, guess not. Now that the band has been reduced to a core trio, it seems like a lot of people are foaming at the mouth due to the heightened songwriting demonstrated on here. I had read more about this record than I think I expected to, and before actually listening to it, so I kind of knew what I was getting myself into when listening to this. I've never been the biggest fan of melodic black metal, or at least bands that have been tagged that way, if only because it never felt quite as exciting as the more kvlt style or as interesting as some of the more experimental acts, and I turn to melo-death and traditional heavy metal if I want to hear big guitar melodies. Not to say I'm totally against the genre, I just can't help what I like.
Since I became a Naglfar fan during this five year period of absence (in terms of releases), this was my first Naglfar record where I could really think about what the band were doing in comparison to their previous records instead of just letting it play. I have to say that this release did surpass my expectations for it, even though I had read that it was a very good album from numerous sites. While it still doesn't surpass Sheol in my opinion, I do think that it is certainly one of the band's best releases. The melodies on here don't feel contrived in any way (which is one of the reasons I typically don't tend to like this sub-genre) and feel quite appropriate for the various ways they're used on here, whether it's used more of in a chorus sort of way or just as a break from the more visceral tremolo picked riffs, the band do a very admirable job. Despite all of this, it's not like I can pretend like I haven't heard some of the ideas used on here before. Of course there are ideas that have been done hundreds of times and are now genre staples, I can deal with that, but tracks like The Monolith or The Dying Flame of Existence stood out in this regard because they are slower and have more of an atmospheric touch to them that makes them stand out when coupled with the more "standard" Naglfar faster tracks. I will never say those tracks are bad though, or even that they hold back the album, I actually really like the latter track, I just think that the band could have done them a little bit better, or added a little bit more of their own personality to them. I just happen to think that when the band are going over faster tempos, they tend to produce some more memorable riffs and melodies, which just shows more of a comfort level in that sort of dynamic more than anything else. They pull both ends off well as far as I'm concerned though.
It's definitely a better record than I ever expected to hear from Naglfar, so I'm more than glad that I decided to give this record a shot. I somehow doubt that it's going to blow open a whole lot of walls, but it's the type of record that I could definitely see attracting a lot of new fans to the band. If you happen to enjoy big melodies and tightly performed black metal, this is a record you really shouldn't miss out on.
Overall Score: 8
Highlights: An Extension of His Arm and Will, Come Perdition, The Dying Flame of Existence
Posted by maskofgojira at 8:57 PM