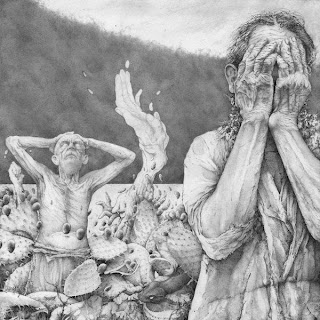 Deathspell Omega, one of the most interesting, revered, and exciting bands to ever emerge from the black metal scene returns with another EP. Yes, by now everyone is saying that anything remotely dissonant in black metal is now a DSO rip-off but hey, what can you do. Even DSO is apparently bored with all their followers and have decided to change up again.
I guess it's only natural that ever since Paracletus came out back in 2010 more and more bands have been jumping on the DSO bandwagon and trying to ape their sound (some do it better than others, obviously), so the band that helped to start that trend is now ready to move onto something else. The six songs DSO produced for this release are among their most abstract, accessible, and interesting as of yet; and I know that those adjectives might not seem like they work together, but hearing this, they really seem to. Although it might not seem like the most obvious comparison, while I was listening to this, all I could think of was that this is what I'd imagine Neurosis sounding like if they had started dabbling more and more in the world of black metal, and that's not meant as a bad thing at all. For myself, these songs aren't as disorienting or chaotic as their more recent releases have been, though to say that it isn't either of those would be totally wrong, but it feels more controlled and there's more room and space being used. With that being said, there still isn't much on here that relents, it's pretty full-throttle, even the minute and a half long Sand is a bruiser. I know there's been a little bit of concern over the shorter track lengths, but it seemed like, at least to me, that the whole thing flowed together like a continuous piece most of the time, maybe others don't get that. Either way, the material still rules.
There was little cause for concern and hardly any indication that this would be bad, DSO have yet to not deliver. While I do wish for more, what's on here is just more fantastic material and another step forward for the band. If you're one of the few who has yet to be initiated into the cult, grab yourself a copy and prepare to enter.
Overall Score: 8
Highlights: Fiery Serpents, The Crackled Book of Life
Posted by maskofgojira at 12:12 PM