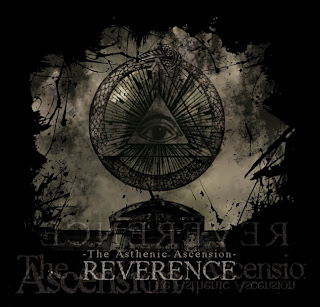 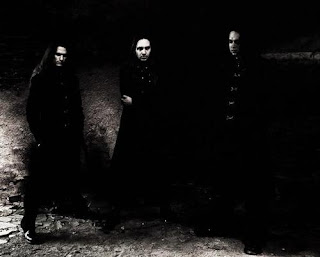 I've been a Reverence fan for quite a while now and it's a band that, despite their long running time, haven't really gotten a huge following. They're obviously close with the guys in Blut Aus Nord and such since they've done two splits with BAN, so you know they're at least very capable. Aside from that, it's just been an absolute ride listening to their albums.
In my experience with the trio known as Reverence, I've always likened them to a more accessible version of Blut Aus Nord, or to be more specific, what BAN might sound like if they had riffs. You see, both bands have quite the affinity for big, industrial atmospheres, mechanical rhythms, and abstract song riffs that morph from head-scratching to mind-bending, though Reverence don't focus on the last one nearly as much as BAN does. I'm sure other listeners will find even more similarities between the two as well, but what strikes me as the weird thing is that even though BAN has released two splits with Reverence and for as great as the material this band puts out, why more people don't seem to hold them in anywhere as high esteem. Sure, the band may not be as pioneering as their predecessors were or as abstract, but you'd think more people would be willing to accept a more riff driven alternative to that abstraction. Personally, I wasn't super into the band's last album, 2009's Inactive Theocracy, because it was so different to anything that I had listened to at the time. It was like the band decided to shove symphonic ideas into their already harsh and weird sound, and at the time I just couldn't comprehend it. Even though today I'd like to think that I understand it a little bit more, I still prefer their other material to that release.
What makes this record different is the power of the riff. Songs like Darwin's Black Hall and Cold Room are among the best sounding and most memorable riffs I've come across this year (no joke) and still manage to fit into the cold and mechanical world of this album without coming across like a grab at mainstream attention. This isn't a newer group that has seemingly jumped on the BAN or DSO bandwagon and started to use weird and dissonant sounding riffs, no, these guys have been doing it at least since 2005's Industrial Mental Concept. The use of guitar harmonies and bluesy solos on here also comes across as something that is more graspable than anything on their earlier material. These are the sort of songs that are memorable while still appealing to the more heady and cerebral side of black metal. You'll come back hearing little things that you didn't hear before, but if that's not your thing, as I've said numerous times before, you still have great riffs. This is also a much less dense record than its direct predecessor was, favoring bleaker and more simplistic backdrops over more lush and brighter ones, but it never loses sight of the power that atmosphere holds in a song. The simplicity of its atmosphere actually makes this a far darker and almost depressing listen at times, hear the end of Psalm IV. Though it's hard for me to say if others will perceive it the same, the depressing end of the spectrum I mean, in no way is this band anywhere near the whole dsbm scene (just to make that clear).
This is one of those albums that just everything right in my book, it ticks all the boxes and makes it an album that I just don't get all that often. Riffs are an increasingly rare thing in black metal, which I'm perfectly fine with, but this delivers riffs, weirdness, and atmosphere in a nice package. Cold, industrial black metal, the way it should be done. Get it now!
Overall Score: 9
Highlights: The Descent, Cold Room, The Asthenic Ascension.
Posted by maskofgojira at 6:47 PM