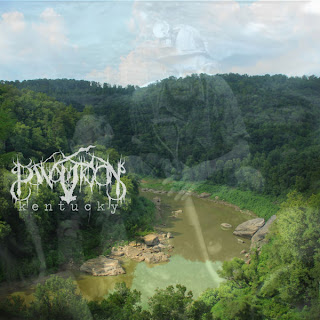 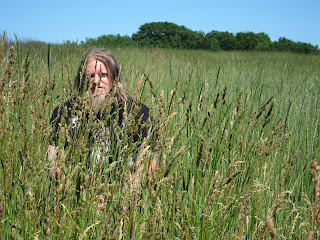 I don't think that it's an understatement saying that if you're a fan of underground black metal, this was probably one of your most anticipated releases for this year. This album was announced early last year, if not late in 2010 even, and really set in motion a chain of events that has brought A. Lunn and this project far more attention than I ever expected. Now, the time has come upon us where this is coming out and expectations are high for what the project will achieve.
I think the best place to start with this is back when the concept and idea for this album was first announced. Back in late 2010 when A. Lunn spoke about his desire to record not only a visceral and scathing piece of black metal, which later came out as last year's Social Disservices record, but also a record devoted to his home of Kentucky, I, like many others, was anxious to hear whatever would become of this. He had said that he planned to record a bunch of bluegrass tunes and make a record of that sort of music, or at least inspired by it. When I heard that, what immediately came to my mind was that Lunn was going to record an entire album of nothing but bluegrass, folk, and country songs, no metal. By now, it's common knowledge that that isn't what wound up happening as there the first songs that were released from this album were pretty interesting black metal pieces.
Of course, while my first idea of what this album was incorrect, the majority of the songs that make of this record are in fact country and bluegrass songs. It's pretty common knowledge now that several of these pieces are traditional coalminer songs, if you couldn't figure that out from the titles alone' but I for one was absolutely blown away by not only the quality of the pieces, but also how powerful those songs happen to be as well. This isn't Lunn's first time singing on a record, he's done it on a few other Panopticon recordings and a little bit on Seidr's debut full-length last year, but his performance and delivery on here is just jaw-dropping. His voice totally personifies that old-school country sound without sounding like a deliberate attempt at a throwback. You cannot deny the power of songs like Come All Ye Coal Miners and Which Side Are You On?. Personally, I wouldn't have minded hearing an entire record of these sorts of songs, especially after hearing this record, I can only hope that Lunn decides to do more with the style in future recordings as well.
When it comes to the three metal songs on here, Lunn really upped his game, delivering not only some of his most melodic material yet, but also some of his most awe-inspiring. Also, the use of pan flute in these songs is just great, it sounds awesome. While they add intensity to what I had originally thought was going to be a pretty mellow record, the color they bring to this is also worthy of note as well. While the country tracks are by no means bright or uplifting (though the latter is certainly subjective), these black metal tracks bring a bit more darkness to the album, which expresses the rage and anger that the concept of the record needs. Having said that, the overall atmosphere of this record is nowhere near as dark as previous Panopticon releases, retaining an almost bright and sunny sound throughout, perhaps an ode to the sunshine and support that eluded the coalminers in the concept. The production on these songs is also well done, retaining the signature rawness and authenticity of the project's early records while allowing the sound of these more aggressive tracks to be a bit more even (IE. the drums are no longer at the very forefront). Though I do question the production on Black Waters, which sounds slightly out of character compared to the rest of the record, it's a very small qualm.
This is without a doubt a favorite of this year, surpassing any expectations I had for it by far. As someone who isn't too into country or bluegrass music, these songs struck a chord with me, and will hopefully strike a similar one in other listeners as well. Do not pass up the opportunity to get your hands on this record, black metal fans will love it as much as fans of acoustic based music. Do not pass this record up!
Overall Score: 9.5
Highlights: Every Track Is A Highlight
Posted by maskofgojira at 11:53 PM