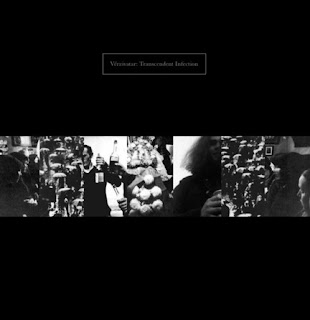 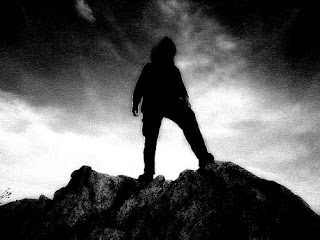 Engulfed By The Void's Twin.

Vérzivatar is a black metal band from Hungry. Having been formed by the band's main musician, Elzeril, back in 2005 using session drummers on his recordings. In this band, you won't find a lot of unique characteristics, but you will find that what Elzeril is doing musically is just a little bit left of center sounding.
Since Elzeril is the main composer and song-writer, on record he plays guitar, bass, and vocals, and, like said above, gets session drummers to play on his recordings; on this one former Marblebog drummer, Hoarfrost. The music on here is very much built around making atmospheres as dark as possible. As such the performance on here could be considered lackluster in a way.
This is a fairly short album, being just under 35 minutes in length. Only six tracks make up this album, and every one is a bit different from the next, so all six tracks don't just blend together in a swirl of atmosphere and tremolo picking. All the songs on here could be considered, standard black metal type tracks, you'll either have a fast one or a mid-paced song. One could also see this record as divided into 2 separate parts, the first 3 songs being more standard atmospheric black metal, and the second 3 songs exhibiting more of a shoegaze, almost early Lifelover or Hypothermia influence.
The production on this album is also fairly standard for this type of black metal, raw. I'll give it to you that it isn't as raw as some of the early Darkthrone records, but it could still be put into that raw black metal genre no problem. Even as the tracks progress into the more shoegazey songs, the production still fits.
One thing that stood out from the first song, Smothery Movelessness, onward was the presence the bass had within the mix. You'll find that while the guitars are fairly simply played to evoke a dark mood, the bass keeps in the background, but the rumble occasionally moves on top of the guitars into the very front of the sound. This could potentially break the mood for some listeners, but it keeps things a little different from how most bands within this sub-genre of black metal do it.
Elzeril's vocals are also a little different, from those that I've heard at least, from your average black metal screamer. His style may seem similar to that of the many suicidal/depressive black metal artists, but he ranges his a bit more than those musicians do. You'll find that, yes, there are those DBM frenzied screams on some tracks, Lascivious Suffering Ecstasy, but that some more speaking type of scream emerges as well, Blood Covered Sky.
One highlight on this album is the longest track, Decadent March of Purity. This track starts off in a usual slower black metal song and tries to attain as much atmosphere as possible, but the middle is what really made this track. This middle section goes into a more alternative rock type of groove where the guitar and bass just sync up really well; one could relate this section to another band coming out in recent years, Lifelover. Another plus is that this is the only track that features a "solo," per say.
Overall, this is not a bad record, but it's not going to win any awards for sure. Impressive bass work and the creation of dark atmospheres are enough to keep an average fan of this style listening through it's whole cycle. If you're a fan of raw, atmospheric black metal with a little bit of a shoegaze influence, than I would recommend you check this out.
Overall Score: 6.5
Highlights: Blood Covered Sky, Decadent March of Purity, Blissful Extinction
Posted by maskofgojira at 8:55 PM