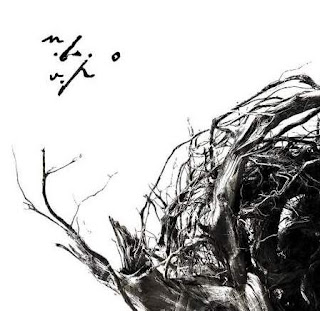 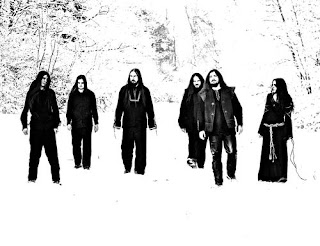 In The Mountains, You Can Make It

This is the new record that Negură Bunget promised listeners would come out after their re-interpretation album "Măiestrit" also came out this year. Unlike that album, this new record contains a brand new line-up, with the only founding member being Negru. The sound on this album obviously contains a different sound.
As just mentioned above, this album contains an almost entirely new line-up, with founding members,Hupogrammos Disciple and Sol Faur leaving the band after a large fight with founding drummer, Negru. This new line-up includes Corb (vocals, guitar, dulcimer, and tulnic), Spin (guitar), Gădineţ (bass and pipes), as well as returning members aGer (vocals, percussion, pipes, tulnic) and Inia Dinia (keyboards). The overall sound is obviously influenced by these new players styles, and shows right from the get go of the album onwards.
In the opening track, Pãmînt, black metal, or metal in general, does not even appear until the last minute of the song. Most of the song being very atmospheric and folk inspired, being almost tranquil and calming, when compared to the previous output by the band. Acoustic guitars, tribal percussion, ambient keyboards looming in the background underneath a powerful baritone voice, not sung, but spoken word all prelude the coming aggression that the final minute of the song entails, and also the rest of the album as well.
Things really seems to pick up pace by the second track, Dacia Hiperboreanã, which is again very tranquil sounding, but this track builds much more in a psychedelic way. While the track builds into a black metal track, worthy of the band's previous full-length "Om," it is still different from it. Black metal parts seem more dominated by a trippy sounding guitar tone, reminiscent of prog rock bands, while ambient keys loom in the back, never dominating the sound, but always present and constantly heard. Vocals also seem more howled, rather than previous screams, while clean voices are added into the mix as well.
As one might expect from a progressive band, this album's better moments come out during the band's more exploitative longer tracks. Longer tracks build and give the listener an almost journey into different atmospheres and areas of the band's sound; while shorter tracks seem to focus more of a folk and ambient side. For different people, they could enjoy one more than the other, but it inclusion of some softer and less layered tracks break up the otherwise, almost overwhelming task of epic song after epic song.
As with previous releases by the band, the production perfectly suits the band's style. While it has the necessary raw quality that is almost essential for black metal, the sound and mix is still very clear and allows everything to be heard. By no means is everything on this record served to the listener on a silver platter, things will come out after repeated listens and will be fresh to your ears, but every instrument can be heard, whether it's the bass or the pipes.
Like a progressive band should, though some will debate whether this band really is "progressive," this band explored multiple territories and does so with ease. More heavy tracks, and shorter ones as well, tend to exhibit some of the most progressive guitar work the band has ever used, listen to the tapping on a track like Cara De Dincolo De Negurã. As well as transitions from heavy and blazing black metal into acoustic folk passages are executed flawlessly and never seem out of place. While the final track Întoarcerea Amurgului is primarily a progressive folk tune with clean vocals and persistant double-bass work that never goes metal on you, it still maintains a mentality of being Negură Bunget.
Overall, this is a strong record and a great note for this new line-up to debut on. While this may still upset those who prefer the work of Hupogrammos Disciple and Sol Faur, this new group demonstrates the ability to work and create music worthy of the band's name. For any who have doubts about picking this record up, proceed without fear, this is an album is not one that you'll be embarrassed to possess.
Overall Score: 8.5
Highlights: Dacia Hiperboreanã, Ochiul Inimii, Chei De Rouã, Arborele Lumii, Întoarcerea Amurgului
Posted by maskofgojira at 2:19 PM