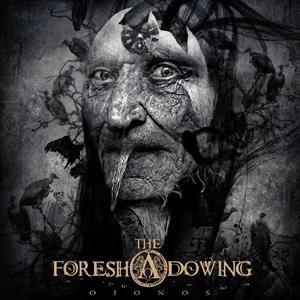 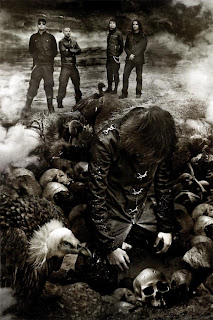 Why So Glum, Chum?

The Foreshadowing is a gothic/doom metal band from Italy. "Oionos" is their second album and seems to favor more of a doom style rather than their previous gothic outputs. While vocalist Marco Benevento shows a growth in performance and style of his own.
The Foreshadowing's last album, and debut, "Days of Nothing" kind of had the flipped style of this album around, favoring more gothic sounds to doom. But from opener, The Dawning, onwards, this album keeps slow-paced drums and heavy riffs a constant, rarely moving into even old-school death metal speeds. Moving from mid-paced and slow-mo pacing with a dark atmosphere lingering around the whole thing and gothic, Dracula-esque, vocals soaring above it all.
This record also flows much better than its predecessor did. Moving from song to song, not so much as a single track or some sort of interlude section to link tracks together, but more in the approach that every song seems to be arranged extremely well, or placed into a perfect arrangement that makes this record all the better. While this doesn't really hurt the record, it doesn't really help it as much as a person might think, but it still makes it a much better listen. The fact that every song is very concise and does not drag on for too long is also another plus.
The guitars are perfect for the style being portrait on this album, slow and melodic. Every song has it's own little melody that makes this album a little different from your average doom album. The guitars also utilize both clean tones and heavier metal tones, listen to Chant of Widows for a demonstration, which separates it from those bands that have only the darker metal sound. The guitars bring elements of "Discouraged Ones"-era Katatonia the most, but also brings to mind Opeth's earlier records, November's Doom, and Godsend.
As previously mentioned, vocalist Marco Benevento's vocals have shown vast improvements in comparison to the debut record from The Foreshadowing. While his vocals on the debut were good, when in comparison to his vocals on this album, those shown on the first record seem like an attempt at trying to be much more of a traditional kind of melodic singer. His presence on "Oionos" is much more theatrical, reminiscent in performance, not in style, of Garm's on Arcturus' "La Masquerade Infernale." His vocals retain a much more baritone sound, and like mentioned before, Dracula-esque sounding, which may sound bad on paper, or typed, but actually fit the music perfectly, listen to tracks like Lost Humanity or Outsiders.
The keys on the album help to create the perfect mood for each song, providing greatly needed atmospheres. But like most doom bands, and gothic to an extent, piano is frequently used as well, most notably on Survivors Sleep, but the textures of each song is what the keys do the best. Providing a much needed gloom to the melodic guitars.
Russians, the second to last track, is a Sting cover from the 80s. Being a power-ballad back then, it is much more of a typical melodic doom song, but features a great little keyboard melody. It is perhaps the weakest track on the album, but by no means a bad track.
Overall, this record is extremely enjoyable and definitely worth any one's time. This may not be a top record or one that is recognized all that much in the press, but you should give it the credit that it is due, being much better than anticipated. This is definitely up there, if not in the top spot for the best doom metal, or gothic metal, album of the year.
Overall Score: 9.5
Highlights: Every Song Is A Highlight
Posted by maskofgojira at 10:29 PM