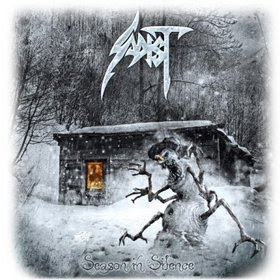 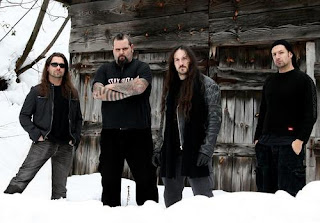 It's A Little Chilly Outside.

Sadist is a progressive death metal band from Italy. "Season In Silence" is their sixth record and another progression in their style; while not a complete shift like "Lego" was and will not alienate their fan base as much. But those familiar with this band's previous works, will find this one just as enjoyable.
As with all Sadist records, this one included, the band have very capable technical and progressive musicians at their disposal. Every player on this album is up there and can write great songs. Every instrument can be heard perfectly and no one seems to be fighting over who should be the loudest, as they all come out at one point or another. But probably the only thing that holds this band back from being noticed by a lot of people is vocalist, Trevor.
While Trevor does have his moments, his screams and grunts don't really fit the band's progressive side. Most of the band's best parts and sections do not feature him; but that's all opinion. Only when the band have their more aggressive, and go more tech-death, do his parts really seem to jell with them.
Guitarist/keyboardist Tommy is always performing melodic prog riffs that are up to the standards for all prog-metal, but with a little bit of a less aggressive edge. This being said, his overall playing style does make way for some more thrash based parts, not really a lot of death metal. His keyboard parts range from keyboard solos to classical piano parts, like in The Abyss, on the title-track, Season In Silence, to sear atmospheric backing to the rest of the band's more jazz section, like in Orgon.
Bassist Andy, has quite a roll in this band; always being heard within a track. While he plays in the background during some of the heavier songs, he excels most when the keys usually come in and he goes more jazz-like in his playing. While other tracks feature some more funk and prog playing, he helps to make this band what it is, like in Frozen Hands or Bloody Cold Winter. His playing could bring to mind the sort of style you might recall from Cynic's "Focus" record, but not quite as technical or as jazzy as that.
This record is fairly short, only about 46 minutes long; but over the course of this short time, the band manage to showcase a lot of technical prowess. They cover a lot of ground within their relatively short songs. The structures of these songs also provide a lot of diversity, very few songs stick within a standard formula.
Overall, this record is actually fairly decent to listen to. While not mind blowing or excitingly new or original, this is impressive and demonstrates great playing. If you're a fan of more technical and progressive playing with death metal vocals, this is for you.
Overall Score: 8
Highlights: Season In Silence, The Attic and The World of Emotions, Ogron, Night Owl, The Abyss, Frozen Hands
Posted by maskofgojira at 6:18 PM