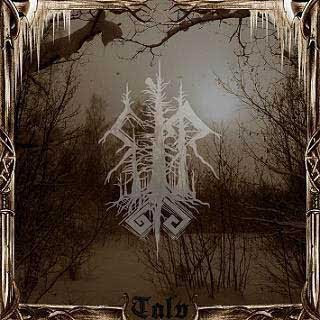 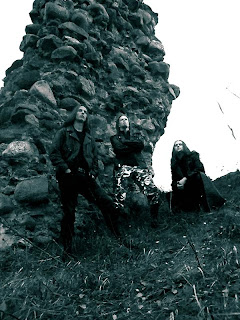 In A Land Far, Far Away.

Sõjaruun are a pagan/black metal band from Estonia. They are a three piece band that perform a slightly off kilter style of pagan black metal. Stealing elements from modern bands like Deathspell Omega or Shining, not so much musically, but just the vibe seems to have a sort of kin in spirits.
3 of the 4 tracks on this EP are over 6 minutes long. These songs each have their own personalities and their own sound, in a way, experimenting within a similar black metal format with other styles. While this may entice others, this is just an EP, and is only a taster to what may occur on their next album.
The first track, Kui Kõlab Sõjasarve Hüüd!, is a black metal song that moves through areas of thrash and clean guitars, reminiscent of Shining style. The track never really seems to hit that black metal pace, remaining at a fairly standard mid-tempo, for this style, throughout the song's course. The use of synth to get a sampled horn section or even an accordion during certain parts of the song keeps things interesting without overusing them.
The second track, Surmkülmast Mullast, is more of a traditional sounding black metal song. This track features fast guitars tremolo picking, speedy drums with fills, and a rumbling bass in the background. The vocals are also more traditionally aggressive snarls. This track also goes through a bit of an acoustic break, but this one is faster and doesn't really slow the track down much.
Jäine Haud is the third track and is a bit more of a progressive track, starting off with a clean guitar playing folk melodies. Once the heavy riff starts, it is more groovy than other tracks, but still very much black metal. This track is a bit simpler sounding than the previous two, yet moves through just as much ground as the first track did.
The final and title-track, Talv, is the shortest song on this EP. This track is definitely the most progressive on here, using clean tones and acoustic parts for about half of the track; being the slowest track but featuring some impressive bass work behind the guitars. This is the track that really captures the entire feeling, not style, of this record.
Overall, this is a surprising EP, that I didn't expect much from in terms of how the music would be. Bringing elements away from your typical pagan/black metal band and performing them well. Maybe not for those who expected this to be a fairly straightforward affair, but if you like a bit of experimentation within a more traditional rooted black metal, this is for you.
Overall Score: 7.5
Highlights: Jäine Haud, Talv
Posted by maskofgojira at 3:57 PM