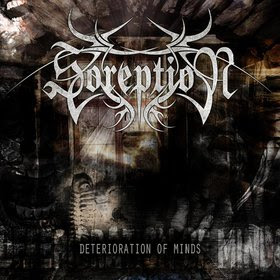 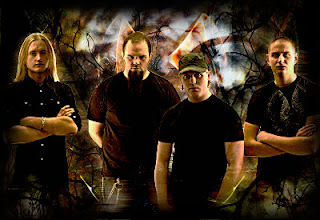 Bigger Than The Average Bear.

Soreption is a technical death metal band from Sweden. On this, their debut record, they are following up their critically acclaimed EP, "Illuminate The Excessive." Taking their ques from the hyped tech bands of today, they are tech-death's newest heroes.
As just mentioned, Soreption's sound is still being developed and influences are still heard throughout. Whether it's Meshuggah or Cryptopsy, the old one, they manage to meld them together into tight, intricate song structures that are also tightly executed. But influences of more brutal death manage to sneak in through some of the breakdowns in these songs as well, think Deeds of Flesh style.
But just because these guys are a brutal tech-death metal band doesn't mean they don't have their flaws. Fredrik Söderberg's vocals have a major deathcore sound, think Whitechapel or Impending Doom, but without the highs. Some of the breakdowns are also a bit reminiscent of this style, like in the opener, Suppressing The Mute. But, the fact that these guys can play their instruments well and craft melodic solos makes it difficult to place that tag on them.
Guitarist Anton Svedin, is a truly great player of this style, and seems to have studied up on all accounts of modern sounding death metal, whether it so happens to be deathcore or melodic death or brutal death, this guy has major chops. His solos are great and sound very clean in comparison to his metal style, this is another thing you could chock up to a Meshuggah influence; and while not as odd sounding as Fredrik Thordendals, they have a similar sound.
Drummer Tony Westermark is also very skilled in his craft. He usually sticks to a regular death metal double-bass drumming with some more stop-start patterns, but he occasionally throws in some cool fills or small things. On Breeding Exile, he does a little cymbal pattern once, that is just awesome sounding.
Bassist Rikard Persson is also a skilled player. His playing is in the background for a lot of the time but does come out for some cool parts, listen to A Wolf Among Men. While it's definitely not as prominent as Cryptopsy, it features, once again, a similar tone as well as some similar playing.
A standout track is ...To Dim The Aching due to it's seemingly standard sound, the band manage to fit in quite a lot. This track features multiple solos as well as some great bass work. While nothing else really is mind blowing, it does not fail to impress.
The final track, March of The Tyrants, is also very impressive. This is the only track that slows down and mellows out, in it's middle section, it moves into an acoustic section, then into a symphonic interlude before moving back into a breakdown. This is definitely the standout track on the album.
Overall, this record won't be a benchmark in any way for modern metal, it does accomplish a decent job at writing some great songs within it's genre. Fans of tech-death or even deathcore will find this record a great addition to their collection, unless they hate guitar solos. One of the best and most concise tech-death record to come out this year.
Overall Score: 8
Highlights: Breeding Exile, ...To Dim The Aching, Deterioration of Minds, March of The Tyrants
Posted by maskofgojira at 3:13 PM