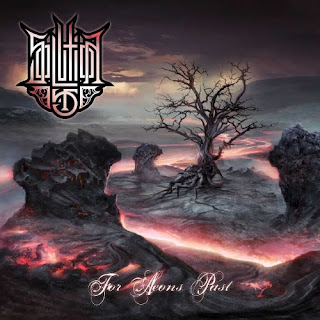 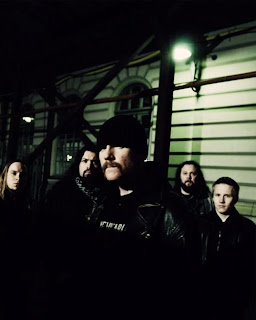 Future Look Into The Past.

Solution .45 is a progressive melodic death metal band from Sweden. Featuring members of multiple different death metal bands and projects throughout Europe, this band creates melodic, catchy death metal with a lot to find inside. While unique, they will be compared to, and do demonstrate similar style, Scar Symmetry.
Probably the one member most known and recognized within the band would be vocalist Christian Älvestam, who most notably was the first vocalist in Scar Symmetry, as well as bands like Miseration, Unmoored, and many others. Guitarists include Jani Stefanovic, from Miseration and Essence of Sorrow, and Tom Gardiner, from Hateform; bass is provided by Anders Edlund, of Angel Blake, and drums by Rolf Pilve, of Miseration and Essence of Sorrow. Previous member Mikko Härkin, of Sonata Arctica, provided keys on the album, but left shortly after, and is regarded there as a session member on the album.
While Älvestam does provide vocals for the album, he only wrote one song lyrically, Lethean Tears. Guest lyricist on the album is Dark Tranquillity's own Mikael Stanne; who also provided guest vocals on tracks Bladed Vaults and On Embered Fields Adust. Like his work in his own band, the lyrics are spectacular, but feature a bit of a twist, since this is not his band.
The overall sound of this band, and this album, is melodic and heavy. With guitars focused on groovy riffs and melodic soloing, and the drums usually being quite standard tech-death drumming. The occasional mellow/power-ballad songs, like Lethean Tears and Into Shadow, brings out the cleaner tones that don't really surface in the heavier tracks.
While not being a Scar Symmetry clone, you can definitely hear similarities between the two, mostly in Älvestam's vocals. This album could most likely be looked at from the perspective that if Älvestam had stayed in Scar Symmetry, this could have been the logical follow up to "Holographic Universe." This album features a lot of his clean voice, as well as his trade-mark growls, but has the same sort of vibe from that album.
As always, Älvestam's vocals are what a listener will most likely be first drawn to when listening to this album. His trade-mark style is perfectly demonstrated on every track with little to no flaws to be heard. Being the main guy to develop and perform the vocals on the album, these melodies he shows border on complete bubble-gum pop catchiness, which could turn some people off, but this only enhances this record's staying power. The only thing that could work against his incredibly powerful voice would be the hints on auto-tune used on a few tracks, which seems unnecessary.
The final track, and probably this record's finest moments, lie within Clandestinity Now. Being more progressive than anything Älvestam's former band ever did, in contains a mind-blowing chorus as well as precise and exact musicianship and guitar work. Being almost 17 minutes long, this track moves through tech-death, melodic metal, ambient sections, and more progressive metal without difficulty shown. Encompassing everything that this album has to offer to a listener and more, if you only hear one track, make it this one.
Overall, this is an incredibly catchy and exciting album. Any fan of Scar Symmetry will find this in league with Älvestam's work in the band. This is definitely worth listening to this year; and while it may not be your album of the year, you'll find something stuck in your head from this album. Check this out.
Overall Score: 9.5
Highlights: Every Song Is A Highlight
Posted by maskofgojira at 1:05 PM