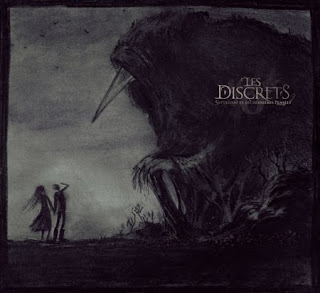 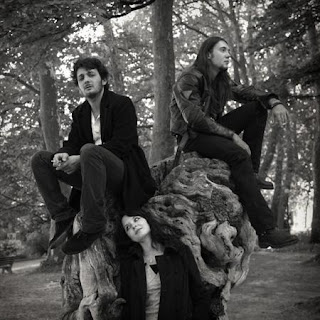 Waves of Joy and Sadness.

Les Discrets is a post-rock/shoegaze band from France. The expression of this band is contained and very focused sounding, never breaking away from soundscapes that it creates. This album creates a very dream-like atmosphere that comes from the shoegaze influence, but is still able to come up with some cool little moments here and there that are completely unique.
Les Discrets was founded by French musician and artist Fursy Teyssier. This project both differs and is similar to his other bands. Having played guitar in both Amesoeurs and Phest, both more black metal influenced projects, this album relates much more to post-rock and post-metal. Both those previous bands do also have their more shoegaze elements, especially the former, but still had a much more metal sound and background than Les Discrets does. But as oppose to those bands, although not much anymore, this band was founded on performing more acoustic based music.
The music on here, having been said before, is very dream-like and definitely showcases the shoegaze element. Having it's sound very much rooted in very ethereal sounding soundscapes allows on to experience a very trippy vibe while listening to this album. But, that's not to say that it doesn't come without it's little stylistic leanings into other forms of music.
The post-rock influence is felt strongly throughout the album, some parts sounding like Explosions In The Sky or God Is An Astronaut, but never losing it's originality. The band's origins in more acoustic music also comes out the most in the middle of the album in songs like Song For Mountain and Sur Les Quais, which both remain largely acoustic. These songs in perticular have an almost folky approach towards the melodies being played.
The band also possesses elements of more post-metal/post-black metal in their sound within a song like Les Feuilles De L'olivier or Effet De Nuit, which begin more in a black metal vain, the latter one being one of the most aggressive songs on the album. Other tracks like these never continue the whole song in a metal sound, but carry with them a bit more of an edge. Unlike his other bands though, black metal screams never enter the picture.
The entire album is done in French, vocally. Comparable to Fursy's other projects, but is also done in clean vocals, which differs from his more metal projects. His style of singing is much more confident sounding than his Amesoeurs counterpart, Neige, which brings a bit more of a accessibility to the band's sound.
This album is at it's best when the band in jamming more in their shoegaze and acoustic leanings, as oppose to their metal. While these two different sides of the band's sound adds diversity, the heavier side of the band never really sounds as good as when the band is performing on acoustic guitars with haunting atmospheres pervading the sound. These tracks seem to be the longer tracks as well, which carry with them a bit of a "progressive" sound, in some cases.
Overall, this is a fairly good album with some cool songs and soundscapes. This could easily be one of the best shoegaze influenced albums I heard in a while, other than Neige's projects, and shows a lot of potential for the future. This album will most likely not appeal to most metal fans, but those with a foot in the door of more experimental music should find something about this album appealing to them.
Overall Score: 8
Highlights: L'échappée, Song For Mountains, Sur Les Quais, Chanson D'automne, Une Matinée D'hiver
Posted by maskofgojira at 6:33 PM