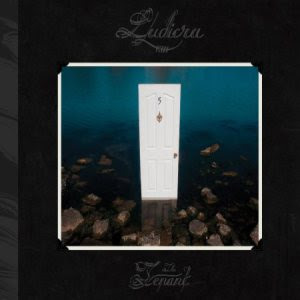 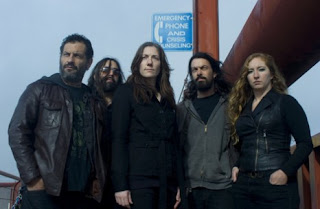 The Landlord Is Waiting.

Ludicra is a progressive/atmospheric black metal band from California. "The Tenant" is their fourth record and definitely demonstrates some newer soundscapes and influences in their sound. While still remaining firmly in their core blackened sound, this record is much more adventurous than their other bands in their genre.
The sound of this album definitely brings new colors into the fold of Ludicra's sound. The opening riff on Stagnant Pond is strangely reminiscent of Enslaved's newer work, and this style continues throughout the record, ever expanding and building upon itself. Even the use of more avant-garde sounding solos are used within the songs, but have a very Iron Maiden sound to them, remaining very harmonized and melodic sounding.
Black metal is still very much a part of Ludicra's sound, in the same way that black metal is still a part of Enslaved or Ihsahn's sound. More odd sounding riffs are constantly present on the record and the black metal parts have more in common with Venom and bands of that nature, kind of thrashy/punk sounding. Whether this is good or band is all up to the listener, but it has a different feel to it's sound than most bands within the "atmospheric black metal" tag, like Xasthur or Wolves In The Throne Room. Even doom/sludge enters the band's sound on this record, on Clean White Void, which also has the best solo on the album on it. Post-punk also mixes in with the title-track, demonstrating a different sound that the band hasn't done before.
Vocalist Laurie Sue Shanaman demonstrates a very Arch Enemy-esque vocal technique. The style is very aggressive sounding, never crossing the line from death metal vocals into black metal, and just remaining in between. But even clean vocals are used on here as well, but are used sparingly and are never full-on belt-outs; the remains very choir and chant-like, being very somber and sober sounding.
Unlike a lot of band under the black metal label, Ludicra has a bass that is fully audible and actually has a part in the band's sound. Bass lines are fluently spread across songs like butter on bread, and are just as good. The rumble is perfect for keeping things rooted against the more melodic and psychedelic riffs that are the focus on the album. All of these things are showcased on the centerpiece of the album, The Undercaste.
Something that strikes me as odd, is the occasional strumming sound heard on tracks. This sound seems to be an acoustic guitar, and seem to just appear without warning; and while acoustic guitars are used on this record, these parts are during electric riffs. They don't seem annoying or anything bad, it's just a little odd.
Overall, this is a strong record that has surpassed my expectations of it. Combining elements of blues-folk, black metal, doom metal, and prog rock and putting them all into a sort of punk aesthetic. This is a record fans of black and sludge/doom should check out for sure.
Overall Score: 9
Highlights: Stagnant Pond, In Stable, The Undercaste, The Tenant
Posted by maskofgojira at 11:54 AM