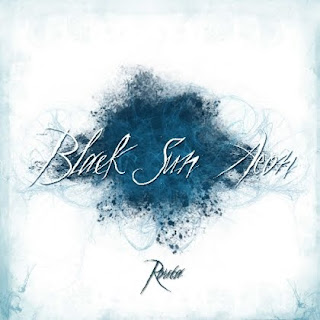 Into The Snow and Tundra.

Black Sun Aeon is a melodic death/doom metal band from Finland. They could be considered something of a super-group featuring Tuomas Saukkonen from bands such as Before The Dawn, Dawn of Solace, etc. on studio growls, guitars, bass, keyboards, and drums, and Mikko Heikkilä, from Sinamore, on clean vocals and guitars. They create something of a unique take on the genre, mixing in some of their other band's more gothic metal style in with BSA.
When Black Sun Aeon performs live, Tuomas performs drums and growls, Mikko performs cleans and guitars, while session member Mynni plays guitar and back-up growls. When playing live, some of the obvious studio qualities of this band are taken away due to only 3 member performing live. So the music is much more stripped down, obviously.
This album is actually a double album. Part one, Talviaamu/Wintermorning, is the first 7 songs on the album, while part two, Talviyö/Winternight, is the last 7 songs. While the first album is very much a melodic death/doom album, the second one focuses on elements of black metal. These two also contrast on the overall vibe of each album, while the first is sombre anyway, it also has those melodies that are easy to get into; the second album is much more aggressive and harder edged where clean vocals are not as prominent.
The more aggressive side of the band may turn off some fans, but melodic riffs are always within these songs that are incredibly catchy. Songs like Cold and River both feature opposite sides of musical spectrum for this band, but both are very melodic sounding. Songs on this album are also very structured within a similar pattern, and no song really tops 8 minutes.
As previously mentioned, this album is not just death/doom, there are other elements mixed within it to make it a little different from other bands doing similar styles. The title-track, Routa, features some black metal riffs, which is really the only track on the first album to do that. Female vocalist Janica Lönn guests on the album providing most of the vocals for the track Dead Sun Aeon, which is one of the more straight-forward melodic doom metal tracks on the album.
Overall, this is a nice album depending on what you like in your metal, stick to the first disk if you like really melodic catchy choruses, listen to the second if you like more blackened doom. While there are plenty of stronger records than this one, it is a nice record that has plenty of replay power. If you like melodic death/doom, check this one out.
Overall Score: 8
Highlights: Frozen, Wreath of Ice, Cold, Funeral of World, River, Wanderer, Silence
Posted by maskofgojira at 2:01 PM