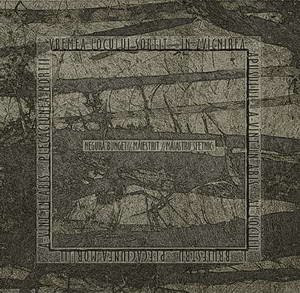 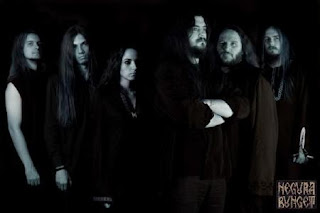 Negură Bunget is a progressive/atmospheric black metal band from Romania. "Măiestrit" could be considered a new album, but is really just a re-interpretation of the band's first album, "Măiastru Sfetnic." This is also the very last recording of the three founding members of the band recording together. So this is a special record to say the least.
As was just stated, this is the last recording where founding members Hupogrammos Disciple's, Sol Faur, and Negru all jammed and recorded together. The three had a disagreement about the band and Hupogrammos and Sol Faur left the band and created a new project called Dordeduh, while Negru formed a new line-up for this band. This new line-up is not featured on this record, but on the new one the comes out later this year.
This record, as stated as well, is a re-interpretation of the band's first full-length album. It features updated production, as well as more modern progressive influences that have moved more and more into the band's sound. These products help to make up a sound that seems to meld newer records with the originating piece of music that this record is based on, seamlessly.
Most of these songs are long epics, but never seems long or boring sounding in the least. The use of black metal as a backdrop to odd, noise and folk instruments with elements of jazz and progressive rock melded together within a single piece of music. Within a song like În-Zvîcnirea Apusului, you get the basic black metal riffs, but you hear elements of jazzy guitar solos, odd folk whistles, and even a cool rhythmic bass part. But elements of the original symphonic black metal that pervaded the original recording are still present, in a song like A-Vînt în Abis.
The entire record has a sense of meditation and tranquility, even throughout the aggressive black metal tremolo picking sections. The elements of dark ambient, folk, and even symphonic music all add very rich atmospheres to the record, whether it's through more keyboard orchestration samples, or folk instruments being played along side the black metal, they both give the record a very orchestral and lush sound. This does, in case anyone was wondering this, differ from the way a band like Dimmu Borgir does orchestral music with their black metal, Dimmu uses actual orchestras as a kind of enhancing product on their black metal, Negură Bunget uses them together with their music, seemingly as one fluid product.
Negură Bunget has a lot going for them in their sound; from more old-school black metal riffs that seem to come from bands like Mayhem and Bathory, to more prog rock stuff. These prog influences takes different shapes in different songs, while and song like Plecaciunea Mortii has a very score-like vibe to it, which could, in some sense, be from a band like Genesis or King Crimson in terms of compositional structure, the opener Vremea Locului Sortit has an almost Frank Zappa quality to it. These two sides seem to support each other, both the very complex and structured songs, but also the quirkiness. Another thing that these qualities allow the music to do is for every instrument to be heard, from the bass to the keys to the flutes, they can all be heard without trying to heard them, and that can also be attributed to the more prog influences.
The final two tracks on the record are acoustic versions of A-Vînt în Abis and Plecaciunea Mortii. These acoustic versions of the songs bring a much darker vibe to these songs, adding that element of ambient/dark ambient textures to them. The instrumentation is very cool sounding, moving from one section into another flawlessly, as the folk melodies are sewn throughout, without becoming overpowering. While the vocals are more whispered and chanted rather than sung. Acoustic also doesn't mean that the entire thing is done with just acoustic guitars, vocals, and atmospheric keys; pianos, flutes, drums, bass, and even electric guitars are used.
Overall, this is an excellent record, and a definite for anyone that likes exploitative music. This is would be a great record if you're just getting into this band, or if you're a long time fan, one that people should hear before they completely write off black metal. While it's not the best album of the year, it is a great one for sure.
Overall Score: 9
Highlights: Vremea Locului Sortit, În-Zvîcnirea Apusului, Plecaciunea Mortii, A-Vînt în Abis (Acoustic)
Posted by maskofgojira at 11:35 AM