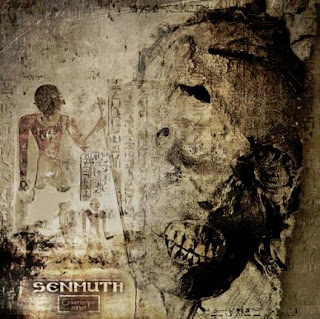 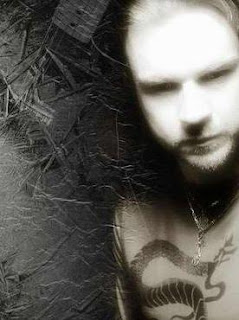 And We Bow Before His Greatness.

This is Senmuth's second record released this year. Unlike his previous release, "Chambers," this new record returns to his more ethnic industrial metal sound. This album is proves to be more of an enjoyable listen compared to some of his more ambient and industrial albums, but those sounds are still very much integrated into this album as they are when they are on their own.
This is an album that effectively mixes the more industrial tones and programmed drumming with more industrial and ambient soundscapes, while more ethnic features are constantly the main focus of the melodies. The guitars are add the heaviness to the record along with the heavier emphasis on the drums, while the actual ethno-industrial provide the "battle" vibe to each song. While this might sound odd written out, it is actually quite interesting to hear.
As metal as this album is, the more ethnic-ambient tracks show up quite early, within the second track, Hqa xAswt. This track displays a lot of the style that was found on "Chambers" but is not as drawn out as those tracks were. This track may represent different things to different people, for some it might be a cool atmospheric type of track, and that's all it is, while others might see it as a breather between opener Khemkhepra's Soothsaying and Under The Banners of Tetisheri.
Under The Banner of Tetisheri in particular is one of the heaviest songs on the album. This track realise more on heavy and epic sounding metal riffs over the more industrial elements of the band. This track also features some of the oddest vocals on this album, sounding almost strained to be performed.
Sekenenra Taa II is a track that starts off fairly slow, but soon moves into an epic sounding metal song. This track seems to sum up the album fairly well within an 8 minute track. The vocals on this song are a bit more tolerable because they still use the strained style, but more growls are used as well. Guitars seem to have an almost Fear Factory vibe to them, which differs from other tracks that had a bit more of a modern thrash sound.
Being the longest track on the album, Hor Ka-Em-Uaset seems very short in comparison to some of the earlier songs. This track moves into a kind of prog-vibe, with very heavy atmospherics and guitar riffs that move from more thrash based ones into doom territory. Vocally, Senmuth seems to have a style on this song that is reminiscent of Boss', from black metal band Root. The next track, Victory Stele follows within the same vain as the previous track with almost progressive sound to itself, this track features a beautiful piano melody underneath all of the heavy riffs that is just amazing.
The layering of this record's sound is probably one of Senmuth's greatest so far. The sound is crystal clear and yet richly layered and textured with different atmospheres and ethnic instrumentation that won't be heard on a first listen. All of this can occur underneath the outer coating of metal riffs, programmed drums, epic sounding synthe melodies, and rough vocals.
Overall, this is a decent listen except for a few blips here and there. If you can't really hear Dead Can Dance mixed with Aphex Twin and Neurosis, than this is probably not for you; but if you are than you'll be in for a real treat here. While not the greatest record, it proves to be at most points, an enjoyable listen.
Overall Score: 8
Highlights: Under The Banners of Tetisheri, Hor Ka-Em-Uaset, Victory Stele
Posted by maskofgojira at 10:08 PM