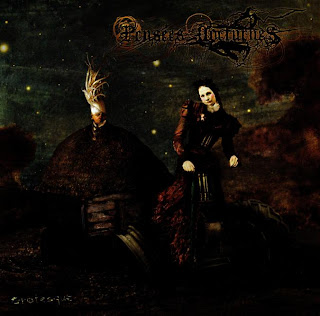 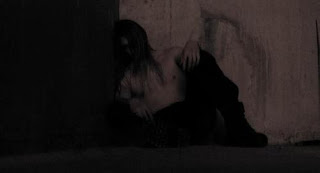 Into The Obscurity Within Solitude.

Pensées Nocturnes is a progressive black metal project under the supervision of French musician, Vaerohn. While many may suspect that this is just another project that is either like Enslaved's prog-rock/black metal hybrid, Mirrorthrone's symphonic classical black metal, or Amesoeur's shoegaze post-black, they are all incorrect assumptions. Vaerohn creates a style that is unlike that of any other black metal band or project out in the scene today.
Vaerohn utilizes elements of all of the bands mentioned above, but not in a regular fashion. Yes, he has very progressive song structures, yes, he uses symphonic and orchestral music mixes with metal, and yes, he has some of the more depressive elements of black metal, but he does all of this music differently than any of those bands do. I could see more comradely in a band like Mr. Bungle then another black metal band out today, unless it's like Sigh.
The intro track, Vulgum Pecus, is instrumental and the second shortest track on the album, but features odd symphonic orchestration, while a crowd in the background gets louder and louder. Much like the way Sigh has been utilizing classical orchestration within their newer albums, is how this sounds. It also gives off a vibe of being inside a large arena or coliseum, but quickly changes once Paria starts up.
Paria is immediately odd sounding, moving from the classical elements of the opener into fast and blazing black metal with high-pitched moaning. This track continues to move between black metal, avant-garde classical, jazz-fusion, and prog-rock seamlessly, hence the Mr. Bungle reference. The track moves back into a jazzy classical piece after a roller-coaster ride through the avant-garde.
The entirety of this album is almost too odd and avant-garde to be placed within the prog genre, but somehow the balance never derails into silliness or absurdity. Everything on here seems thought out and placed there for a reason. Nothing ever becomes boring and every instrument has it's purpose and is heard at one point or another in the song. The vocals on this album are ranged oddly; while most are high screeches and moans, there is the occasional, more operatic singing placed within a track, most notably within Rahu.
Each track brings something different to the table, with nothing sounding rehashed or re-used. Odd melodies and scoring techniques are introduced that bring something new to the song, whether it's an odd, carnival-like polka melody within Monosis, or more post-rock inclinations within Eros. This blows every other progressive black metal album in recent years out of the water in terms of both compositional structure and performance.
Trying to place a label on this band is the same as trying to place a label on Mr. Bungle. You could write out a long list of genres this goes within, including: avant-garde, progressive metal, black metal, ambient/atmospheric black metal, neoclassical, etc.; the list goes on. Whatever you call it, it takes a few listens to get into this record without your mind drifting away into a strange place.
Overall, this is one of the oddest records to come out this year and is definitely worth checking out. Experimental freaks to dire purists will still find this record hard to penetrate; best listened to when you have nothing to do but focus directly on this. Not for everyone, but those who find this worthwhile will have a field-day trying to hear everything within.
Overall Score: 8.5
Highlights: Rahu, Monosis, Hel, Thokk
Posted by maskofgojira at 7:53 PM