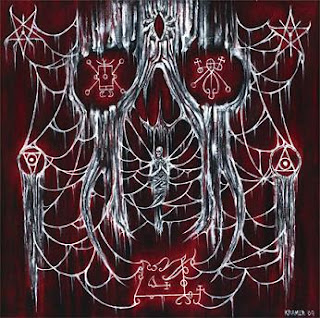 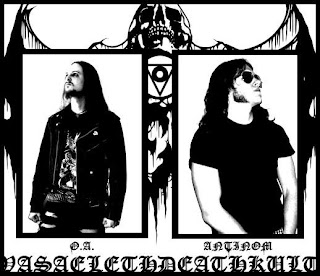 Somewhere Between Dead and Buried.

Vasaeleth is a death metal band from Texas and Georgia. Both members, as it looks, come from a different part of the country, so it's more of a collaboration more than a real band. Unlike a lot of the more recent death metal albums, or bands, to come out, these guys stick to the old-school sound of death metal.
The two members of this band are O.A., who plays guitar, bass, keys, and vocals, and Antinom who plays drums. Antinom comes from a few other black metal bands from Texas, most notably Dagon, but never really broke out. The combination of these two musicians gives this record a rather unique take on death metal.
The overall sound of Vasaeleth is different from newer bands like Whitechapel or Job For A Cowboy, who both have more produced and polished sounds; the sound on this record is much more raw and atmospheric, similar to Autopsy. Another band doing a similar thing, but not the same, as Vasaeleth is the band Portal from Australia. They both make use of raw death metal with a lot of atmosphere and ambiance. Plus, they are both on the same label, Profound Lore Records.
The songs on this record are also fairly short, most being under 4 minutes. Within the short time they give each track, they show a lot more than a lot of other bands who span a song close to 6 or 7 minutes. These songs are just very straight sounding and have a lot of aggression; this is pure and raw death metal.
The drums in this band are also not as triggered as a lot extreme metal band's are, they are very raw, again, and sound like a real person playing them. You can hear in the opening track on the record, Wrathful Deities, that tempos actually slow down around the middle of the song. The fills that Antinom plays are also very simplistic when compared to other death metal bands, in general.
O.A.'s guitar playing is also very raw sounding. He is also not very flashy or shows off, he sticks toward more of a groove, never really going into a solo. The riffs are also never super-technical or blazing fast, though fast sections do come out. His bass playing is never exceptional, and never really comes out a whole lot, but is most noticeable in the song Gateway to The Cemetery of Being. O.A.'s vocal style is also very different compared to most newer bands; featuring a lower range, that has a lot more in common with brutal death metal.
Though this band is very much a straight-forward death metal, they do mix in some other styles to keep things interesting. Much like, who I would assume are these guy's heroes, Autopsy and Incantation, they mix in some grind and doom parts. Slower and more sludgy riffs are in nearly every song, and they usually lead into a grinding part as well.
Overall, this record is actually very well crafted and goes back to the basics of death metal. For fans of the more old-school, raw, and unpolished death metal of the 90's, this is a must. Profound Lore has put out another stellar record.
Overall Score: 8
Highlights: Figures of Chained Spirits, Curse Seeping Through Flesh, Spirit of Noxious Miasmas, Crypt Born and Tethered to Ruin
Posted by maskofgojira at 4:55 PM