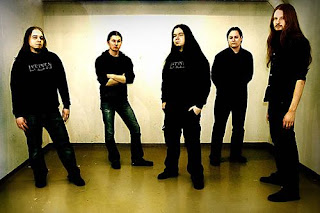 In The Not So Distant Future (Is An Opeth Appearing).

Ikuinen Kaamos is a progressive black metal band from Finland. Steadily over their 13 year existence they have moved from a basic black metal band into a band that is becoming more and more revered for their progressive songwriting abilities and technical playing skills. This new album picks up where their last EP, "Closure," left off, and creates a sound that is familiar, yet different.
That sound that Ikuinen Kaamos has stumbled upon is that of Opeth. Upon hearing the first song, Indoctrination of The Lost, you get the feeling that you've heard this sound before, if you're an Opeth fan, you have heard it before. This opening track sounds like it could have been on the "Ghost Reveries" album. It's all subjective as to whether this is a good or bad thing, but during it's mellow acoustic sections, you could replace vocalist Risto Herranen with Mikael Akerfeldt, and this would be an Opeth song.
Other than that, this is a fantastic album full of different influences, Opeth just happens to be the most prominent. Since most of the songs are over 8 minutes long, a lot is accomplished. Utilizing elements of their past black metal styling, their newer progressive sections, melodic solos, clean vocals, and acoustic passages, makes each and every song a treat to listen to over and over without them becoming boring.
The second track, Statues, continues where the opening track left off, but contains more black metal oriented vocals instead of death grunts; though they are mixed together throughout the track. While this track is not as varied as the opener, it features more melodic guitar riffs and more of a black metal influence in the middle of the track. The ending of the song utilizes more acoustic guitars playing a folk melody.
The center piece of the album, In Ruins, is not only the shortest track on the album, but is also the most melodic. Up to this point, mostly growls and screams have been the main vocal style, they are still used on this song as well, but cleans feature dominance. The main melody in the song could be a solo in it's own right, while about half of the track is acoustic, that melody is done electrically. The solo on this song is also one of the best on the album.
Condemned is another track that is much more like the first 2 songs. The opening riff on this song is very unique sounding and has quite and addictive quality to it. This track is the first that brings in an influence from doom metal in it's chorus section, while not overly fast or progressive, it's the element of melancholy that brings this riff to a listener's attention. This track brings to mind a bit of a My Dying Bride or Katatonia influence to the band's sound, which is good to hear some doomy riffs.
Apart closes the album on an epic note, being over 16 minutes long. This track does what every epic should do for a band, encompass everything that is on an album and bring something unique to the table. Solos are scattered throughout the song and range from more melodic and soulful to fast and technical. Acoustic passages are also fluent in the song, remaining very much a part of the band's sound, bringing that doom influence to their playing, bringing to mind Swallow The Sun for one part. The vocals vary from death and black metal screams and grunts to clean singing on this track, but the music is the main focal point on this track.
Overall, I could compare this band, and this album, to In Vain and their new album; this is because both have moved from a progressive black metal style with mainly screamed vocals and black metal oriented songs into progressive territory that utilizes more styles. This is an album that many fans of progressive metal will find enjoyable and worthwhile. This is a band that is still quite unknown, but on the rise, check out this album.
Overall Score: 9.5
Highlights: Every Song Is A Highlight
Posted by maskofgojira at 7:50 PM