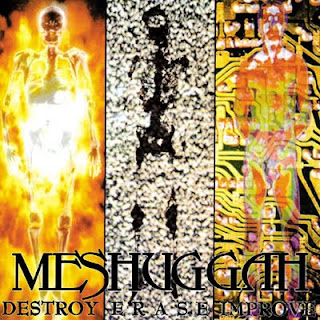 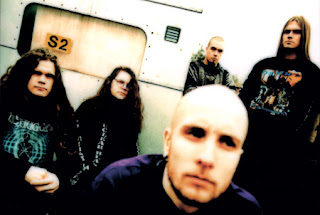 Meshuggah, a metal band from Sweden. I say metal because their style combines aspects of more and less then metal styles. While creating a style which no one has managed to best them at yet.
"Destroy Erase Improve" is the record where Meshuggah found their sound. Though their first album, "Contradictions Collapse" had traces of originality, it still clung to it's more groove and thrash based origins like Metallica and Anthrax. This record took those thrash roots, pulled them out of the ground and threw them into the blender with everything else (including the sink). What came out was something that was completely unheard of and unique sounding.
The sound on this record somehow manages to combine that groovy thrash metal sound with more technical aspects of jazz-fusion and progressive rock. While the main ideas are undoubtedly still metal, they are much more technical and mechanical sounding than anything else from the metal scene back then. Sounding very much like Metallica and Fear Factory had a baby that just did not want to fit in with all the cool kids at all and did what he wanted.
Guitar players Marten Hagstrom and Fredrik Thordendal showcase an extreme talent for crafting machine-like grooves that can make heads spin. While some songs exhibit more technicality than others, every song never sounds like the another on the album. From the wildly technical Future Breed Machine to the more mid-paced Soul Burn, and everything that comes after them, groove just falls off them and no pattern seems to repeat itself.
As a lead guitar player, Fredrik makes each and every solo on "DEI" sound unique among everyone else. Distancing himself from more straightforward solos or mind-blowing speed metal solos, he does what very few were doing, if anyone in the metal scene at all was doing, making his solos extremely technical and clean sounding. The tones on guitar solos here is surprisingly clean sounding, without the assistance of more metal distortion.
Drummer Tomas Haake adds to the band's sound odd tempo shifts and also functions as the main lyricist. The abstract topics he covers seem to range from technological mass control to more spiritual and conceptualize beings. Drumming wise, he combines odd poly-rhythms that mix extreme metal tempos with more jazz timing. From the furious tempos on Vanished to the slower tempos on Inside What's Within Behind, he can add little things that can make any drummer stop and hit repeat.
Vocalist, Jens Kidman, is also a natural for Meshuggah's sound. Vocally being somewhere between early death metal grunters at the time and more hardcore punk/thrash metal shouting, he helps the music to achieve that almost mechanical sound. At this point in time, this helped to differentiate the band from others like Machine Head or Slayer.
Nothing on this record can really be described perfectly without listening to it first hand. For many this record can seem repetitive due to that machine-like groove, Suffer In Truth, jazz-fusion breaks, Acrid Placidity, and constant shifts in the time signatures, Beneath. But those who can actually look past the simplistic angle to which many might see from, you will find those little parts in guitar or drum patterns that differentiate themselves from the last.
What was meant in the title above is that later in Meshuggah's career, many new bands will find them and try to copy them. Bands ranging from citing Meshuggah as an influence to just outright coping their style. Though these bands all take something from Meshuggah, none of them will ever match the style that has made this band such a force in music today.
Overall, this record contains songs that do take a little bit longer to get into than most band's do, but also contains songs that are completely original and can stick in your head. The songs on "DEI" are more complex than most metal bands, especially at the time it came out, but is also what makes these songs so great to listen to over and over again. Do not live your life without hearing this record.
Overall Score: 10 - Classic
Highlights: Every song is a highlight
Posted by maskofgojira at 10:07 PM