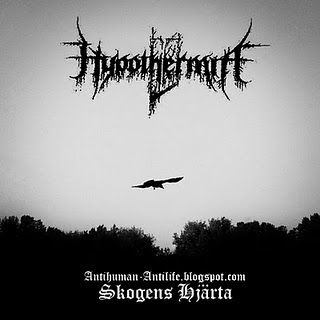 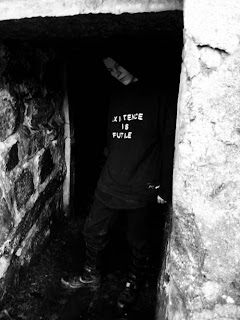 Hypothermia is a depressive black metal band from Sweden. This is the brain child of depressive/suicidal black metal cult icon, Kim Carlsson. Those who are familiar with his other work in Lifelover, Kyla, and Life Is Pain will know about his dark views on life and humanity.
This is the fourth album under the Hypothermia name, not including all the splits and EPs he's released. This new album is both similar and different, structurally, from his previous records in that it is just 1 song that extends over and hour. While Kim has never produced an hour long track, previous records have contained songs that are over 20 and 30 minutes long.
While this is the longest piece of music Kim has ever released, it is also his most melancholic. The use of cleaner guitars and simplistic drumming adds to the starkness and repetitiveness in sound. Bordering between minimalistic and drone tendencies while retaining a core sound that is very bleak and sorrowful. But this is not a drone piece, in fact, it has more in common with post-rock/post-metal in the way it gradually builds upon itself. The song starts and goes through many phases of clean guitar but then has it's more distorted black metal tendencies, having build-ups and falls along the way.
Compared to his previous releases under this name, this new album is, by far, the best production he's had under his Hypothermia belt. While the distorted moments do feature the usual noisy production, the cleans sound very dark and atmospheric while remaining very streamlined. Compared to most of his piers in the genre, depressive black metal, Hypothermia showcases a sound that is much more easy to listen to than others in the genre have produced.
As with other Hypothermia releases, Kim is not alone on the record. Although Kim does provide the main musical direction with his vocals and guitar, he has gotten Richard, from Through The Pain, to play the drums and Johannes to play the second guitar. These three guys manage to create a sound that sounds like sorrow and guilt consuming a person and leading to an eventual suicide. Though that is sometimes the goal of some of these bands.
Some will argue, and it will fit given the overall sound, that this piece was improvised. Given the repetitive sound and small pauses in repeating melodies, it is a rational observation. Since Kim provides the melody and Johannes gives a background, more bass heavy, atmosphere with his guitar and is usually the one providing most of the distortion in the song, gives reason that most of this piece was done on the spot.
Though the pace and tone of the album are definitely not for everyone, it is actually enjoyable for those who are into more bleak forms of music. Fans of funeral doom, drone, improvised music, DBM (Depressive Black Metal), and atmospheric music, namely new age or ambient, will find this album entertaining. The use of sparse soundscapes and bleak images that will fill your mind from listening to this may not sound all that great on paper, or Internet paper?, but is actually very enjoyable.
The melodies that are scattered throughout the recording are melancholic but act as small hooks that are quite catchy. Though it may be hard for people to swallow a piece of music that is slow and sparse, it is actually melodic and entrancing due to it's repetitiveness. The people who have already listened to Kim's other bands know that every one of them has a quality that stands above the rest in the genre of DBM, and this release is no different.
Unlike other releases under Hypothermia, Kim does not scream on this record. Containing only the melancholic bleakness that the instruments provide. Faint traces of vocals can be heard in the last minutes of the recording, it is hardly his mirror-breaking screams from other records.
Overall, this record is thoroughly enjoyable. Though a lot of people will find this record boring, it contains the right elements to pull you down into submission and will entrance you. The depressive sound that Hypothermia has always brought to the table has only been enhanced with Kim's approach toward improvisation. Worth a look into for fans of the above styles.
Overall Score: 8
Highlights: The only song on the record
Posted by maskofgojira at 4:47 PM