Pitbulls In The Nursery - Lunatic 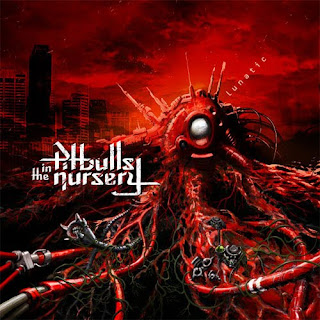 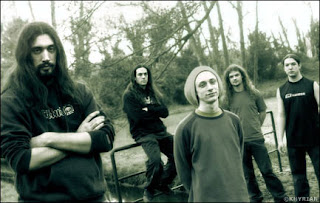 Someone In This Group Has Got The Crazies.

Pitbulls In The Nursery is a technical/progressive death metal band from France. While their overall influences can be traced to other styles beyond metal, the performance on here is rooted in those styles already mentioned. This is the band's debut record and shows an incredible amount of talent.
The root of this bands sound is most definitely rooted within the death metal realm, but they explore so much more on this debut. From the technical and progressive playing styles exhibited by the instrumentalist to the use of more obscure lyrical topics. Every influence can be heard, but is melded into new shapes and forms that make them what PITN wants them to be.
Influences can most obviously be drawn from bands like Meshuggah, Cynic, and Atheist. These can be attributed to the bands love for more groove-based riffs while making them wildly technical. The occasional jazz-fusion break appears here and there throughout but aren't as present in the sound as the more aggressive side of the band. The more progressive side of the band is made clear on the first song on this record, Lunatic Factory, expressing a technical groove for the basis of the song, while those Cynic-influenced moments appear during the chorus. While the entirety of instrumental track Antagony is almost a tribute to Cynic and Atheist fusion.
The musicianship on this record blows many newer bands away and puts these guys near the top for new contenders. Every instrument is heard on this record and no musician ever gets left is the background. While the guitars do remain the instrument most will hear, the drums are always keeping up with the rest of the guys in the band and is never just providing blast-beats. The bass is also very impressive on this record, always being near the front of the sound and comes out for key and memorable parts of songs.
As already stated, the bass is a thing that this band has going for them. Bassist Francois Ugarte includes elements in his overall tone that can be traced to more jazz and funk styles. These are all utilized in the band's sound, whether it's the technical bass line provided for the end of the chorus of Impact or the funk beginning riffs provided on Corrupt TV, this guy knows how to play.
Drummer Jerome Farion's drumming on this record is not just what many will attribute to a technical death metal band. A lot of the drumming on this record could be compared to the early work of Meshuggah drummer, Tomas Haake, utilizing more obscure grooves as well as bits of more jazz oriented fills and patterns. He does of coarse do more traditional death metal blast-beats on these songs, namely on Corrupt TV, but they never withstand the entire song like many bands.
While guitarist Mathieu Commun and Simon Thevenet both exhibit a lot of technical and progressive playing abilities on this record. While they provide grooves that are somewhere between Meshuggah-like grooves and Dream Theater string weedling, they never cross the line into complete wankery territory. Solos on this album are utilized in more odd fashions, never using a typical styled solo more than once. These solos are more comparable to those of their influences, like Meshuggah or Cynic, being very melodic, but very odd sounding.
Vocalist Julien "Panda" Foucault's vocals on this album are more death metal oriented. The vocals don't change a lot, remaining mainly low and in the range of most death metal vocalist, so the singer doesn't particularly standout as the best musician, but he'll change it up in certain songs. Tracks like Calibrated or Corrupt TV feature bits of his spoken vocals to change up this monotony. Though he is not the best vocalist in death metal, he is creative enough to create some unique vocal patterns that do show some talent.
3 tracks on this debut are taken from the band's 2001 demo. Those tracks include: Impact, Strong, and Monkey's Masturbation, and these are the shortest tracks on the record. These tracks are less technical than the rest and feature a more Meshuggah mixed with later period Death sounds. Being progressive but more rooted in traditional death metal styles.
The final track on the record, In My Veins, is over 16 minutes long. Though the actual track itself is onl about 5:30 minutes, but the rest of the track is not just silence. About 7 minutes in, a sitar comes in and begins to play, quite elegantly. Around 9:30 minutes drums, bass, and a clean guitar come in a accompany it, giving it an interesting sound. The track begins moving from more fusion sounding into a more metal sound that was exhibited on the rest of the album.
Overall, this record is extremely promising. Sounding like an interesting mix between technical and progressive metal where all the musicians are talented and can all play their instruments well enough to craft songs that allow them to show off but still remain catchy. Fans of technical and progressive music will find a lot of good playing on this record and should take the time to look this band up.
Overall Score: 8.5
Highlights: Lunatic Factory, Impact, Corrupt TV, Monkey's Masturbation, La Norme, In My Veins
Posted by maskofgojira at 5:30 PM