HIM - Screamworks: Love In Theory and Practice 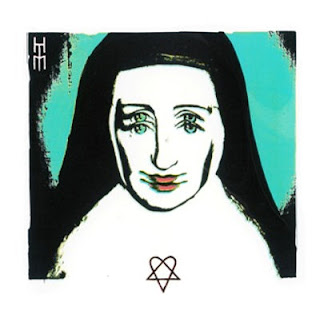 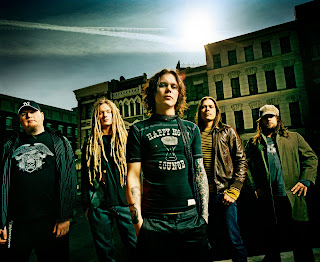 HIM is a band that has always been at a crossroads bordering between more melodic metal and heavy pop music. Their new album is leaning a little more towards a direction they've always leaned against, but now is being embraced more fully into their sound. "Screamworks" is an album that is sure to win HIM over a lot of newer, more mainstream fans.
Opener In Venere Veritas opens the album with the very bubblegum pop-like line "Lets fall apart together now." This line opens to that trademark melodic metal sound that HIM has developed throughout their career. This is just the opener to an album filled with those soaring hooks that will infect your brain. The structures on this album are also a lot more predictable sounding, with another pop music comparison, with most songs featuring a verse-chorus-verse-chorus-bridge-chorus for most songs, making most of these songs under 4 minutes.
The biggest change heard on this record, comparing it to previous ones, is how bright "Screamworks" sounds. While records like "Venus Doom" or "Love Metal" had a very dark sound that bordered on more classic sounding metal, this new album features that sound many pop bands have, where everything seems very cheery. The tone of the whole record sounds much happier than any other HIM record so far.
Ville Valo's vocals sound the most English than ever on this record. What that means is that his pronunciation sounds the most American it has ever been. On songs like In Venere Veritas or Heartkiller, you'd be mistaken for thinking it was some new band from the US.
The guitar on the other hand, has the trademark HIM sound of more heavy riffs to counter Ville's more melodic vocals. Riffs on Shatter Me With Hope or Ode to Solitude are straight-up rock parts where Mikko Lindstrum is shredding out. This album may be HIM's most poppy sounding, but it is also the one with the most shredding on it.
But even in this newer pop format, HIM is still able to pull off some more experimental moments in these songs. HIM attempts their usual power ballad song in Disarm Me (With Your Loneliness) which features the usual traditional acoustic verses into heavy choruses. While Ode to Solitude, feature sounds with more electronica influences. The Foreboding Sense of Impending Happiness sounds more like a trip-hop song more than a rock song. Seeming to have a bit of Portishead influence rather than Iron Maiden.
Though not as dark as "Venus Doom" it has the brightness that will appeal to a younger crowd of kids and fans. Some will cry sell out, but it's not selling out if you're doing what you've always done, but refine it. This record has songs that are just as good if not better than songs on HIM's previous records, they're just more straightforward sounding.
Overall, this is a great record for those people who enjoy a good melodic song or great hooks. This album has the most catchy moment in HIM's career so far. This will definitely get the band a larger fan base within the more mainstream crowd of people who don't listen to metal or heavy rock.
Overall Score: 8
Highlights: Scared to Death, Heartkiller, In The Arms of Rain, Ode to Solitude, Shatter Me With Hope, Acoustic Funeral (For Love In Limbo), Like St. Valentine
Posted by maskofgojira at 11:11 AM