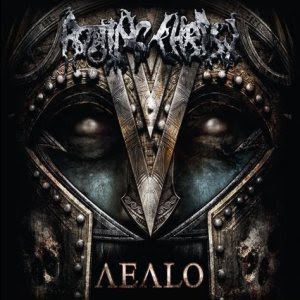 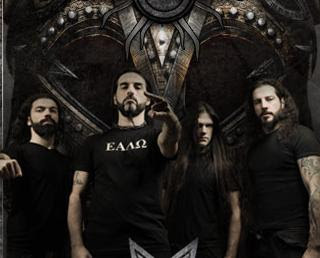 A Breath of New Life Into A Once Dead Body.

Rotting Christ is a black metal band from Greece. "Aealo" is their 10th full length album and contains the most experimentation they've done to date. While they've previously explored realms of industrial, gothic, more melodic black and death metal territories, their new album features the most fusion of styles yet.
While most people might be turned off by the name, Rotting Christ actually has many elements extreme metalhead would probably enjoy. Most people, based on the name, would probably assume the stereotypical satanic black metal band, but they are so much more than black metal and they have moved passed satanism in terms of lyrical subject. Exploring aspects of more symphonic and worldly music cultures while keeping their songs melodic and catchy, keeping an experimental sound ear-pleasing is not the easiest thing for a band, but Rotting Christ pull it off time-and-time again.
Sakis' on this album doesn't feature as much of his vocals present. As the producer of this album as well, he has kept them up-front in the sound, but doesn't make the sound as basic as vocals on top of guitars, bass, and drums, with atmosphere. Vocals are still the focal point of songs like Demonon Vrosis, but each song has a different atmosphere due to the use of a choir and more symphonic elements.
When most people hear symphonic and black metal together though, most people would probably assume, Cradle of Filth or Dimmu Borgir, orchestral giants with black metal, but that is not Rotting Christ does. The use of symphonic elements on this album are not directly influential and up in front as many might assume. Choirs take the front on the title track, Aealo, but only add to a more open atmosphere in a song like Noctis Era with chanting behind a wall of guitars.
"Aealo" is an album that contains some of the catchiest riffs Rotting Christ has ever made. Songs like Demonon Vrosis and dub-sag-ta-ke feature melodic riffs and solos that will please most fans, who might believe that Rotting Christ has left behind their more melodic sound of "A Dead Poem" or "Sleep of The Angels."
While the experimental nature is present on every song, some feature more than others. The short dub-sag-ta-ke features the use of more oriental instruments while it's follow up Fire Death and Fear features an almost melodic death metal sound compared to the more black metal sounds of the record so far. This sound continues throughout the rest of the album as some more death metal influences blend with the melodic sound of the lead guitars.
Sakis' vocals themselves are still one of the most unique in the metal realm. Still being far from the screams of black metal, the growls of death metal, or even more hardcore shouting, Sakis has a style unique unto his own. Utilizing a harsher style of shouting that has become his signature. But like all good vocalists, Sakis realized that on an album like "Aealo," he had to take a step back and let others do what he could not.
Primordial's Alan Nemtheanga is featured on using a very dark clean performance to counter Sakis' more blacken shouting on Thou Art Lord. While the final track features the original performer on the cover song, Orders From The Dead, Diamanda Galas on lead vocals. Both performers are not just used in one spot like most guest spots, but make it throughout the whole song, giving these songs a little bit more depth to their sound.
The final track, the Diamanda Galas cover, might throw some people for a look. While guitars are featured in the sound, they are not as up front as Galas' vocals. With more world music influences with tribal-like chanting behind the guitars, tribal percussion, and symphonic backdrop. This track does soon move into metal territory that will win back the fans who might have been turned off by the introduction of this track that becomes much more epic as the track progresses. This track definitely stands out among the rest of the songs for it's use of different stylistic influences.
Overall, "Aealo" is an album full of great riffs and hooks that will appeal to fans of melodic metal music in general. Obviously, the name poses a great obstacle for people to overcome, but those who do will gain an album filled with a lot to hear. Nothing sounds overused or replayed, it all sounds very fresh. From beginning to end, this album is a journey and an exploration of sound that never gets on your nerves or becomes boring.
Overall Score: 9.5
Highlights: Every song is a highlight
Posted by maskofgojira at 9:13 PM