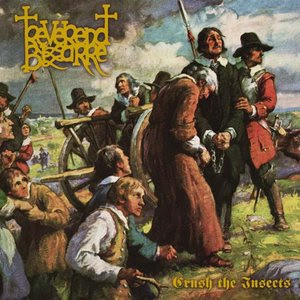 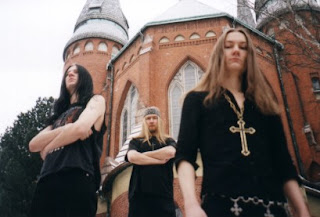 All Hail, The King Is Dead.

Reverend Bizarre is a doom metal band from Finland. Unlike many doom bands that were out at the time Reverend started, they play a style similar to those of old. Though they are no longer around they were brain child of doom-man himself, Sir Albert Witchfinder, and played old-school doom.
The doom style played by Reverend Bizarre is the kind of doom the bands like Black Sabbath, Pentagram, and St. Vitus did. More old-school sounding than anything retro does these days, Reverend possessed the very spirit of doom in their work. From the insane lyrical topics of Doom Over The World to the pure heaviness of By This Axe I Rule!.
But this is not a one-man band. Albert plays the bass and acts as the vocalist while Monsieur Earl of Void plays the drums and Father Peter Vicar plays the guitar. These three guys provide some of the best old-school music to come out in recent years.
While the style of Reverend Bizarre is most obviously traditional doom metal/heavy metal there are differences in the performance and nature of the songs. The first 3 songs on the record, Doom Over The World, The Devil Rides Out, and Cromwell, are very upbeat in tempo and feature a much more accessible sound. Once these 3 tracks are done, the epics become the standard of the album. Most songs reaching over 10 minutes in length.
The first of these epics being Slave of Satan, being the longest one as well, reaching over 13 minutes. Opening with a strong, but slow moving, bass line that gradually brings the other instruments into the sound. Albert's vocals hark back to the days of early Candlemass both in the tone and style he's singing in and the lyrics he's singing about.
The final track, Fucking Wizard, harks back to the days of Black Sabbath, with the opening riff sounding very much like the band's signature title-track. Possibly the slowest moving track on the album, with Albert acting more as a narrator more than a singer for the basis of the track. It isn't until the last 3 minutes that the song picks up speed and becomes more like the first few tracks.
With the exception of a few select parts, like the last few minutes of Council of Ten, the music of these epics is slower and heavier than the first tracks. But those moments where the music does pick up tempo again, it is worth listening for the unexpected change. But this usually occurs only after a longer series of more dirge-esque hard hitting doom.
What many people may not realize about Reverend's sound is that the bass is quite high in the mix. But the bass is both a part of and separate from the sound of the band. Most of the time it is the former, being an essential part of the heaviness of the band, but when it moves away from the sound, it is usually for only a short and catchy bass-line that adds to keep the listener tuned in.
Due to there only being three members in the band, and the fact that this is drawing influence from the classic doom bands, the overall sound of the band is very stripped down in comparison to others in the genre. No keyboards or folk instruments are brought into the mix in Reverend's sound, so it is very stripped down with every instrument that is played having a large place in the overall sound.
Doom Over The World is probably one of the best metal anthems to come out in the last 10 years. Presenting a picture of war and destruction in it's lyrics, the music itself features a catchy groove that is memorable. Albert's vocals are very retro sounding, with everything sounding very dramatic in nature. Compared to many of the other songs on "II: Crush The Insects," this song is very upbeat and simple sounding.
Overall, this record is definitely worth your time. If you're a fan of the classic metal bands or a fan of doom metal done the old-school way, this is a must for you. This band has released some of the best metal anthems in recent years, so this album is one every metalhead must hear before they die.
Overall Score: 9
Highlights: Doom Over The World, Cromwell, Slave of Satan, Fucking Wizard
Posted by maskofgojira at 3:09 PM