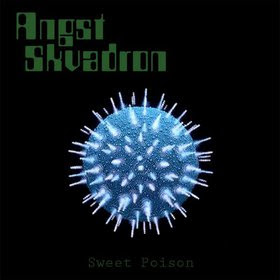 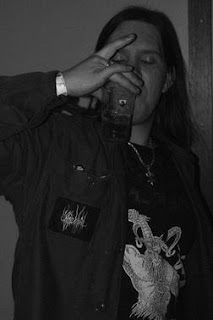 War of The World's Distant Cousin.

Angst Skvadron is a psychedelic black metal project by Trondr Nefas, of In Lingua Mortua and Urgehal and many others. Angst Skvadron is his outlet for all of his more out of this world ideas. These topics are focused more on lyrics, which focus on things like suicide, UFOs, and aliens.
Though Angst Skvadron is a project formed by Nefas, he does include others to create records and play live with him. O.M.P. contributes the female vocals, LFF contributes the drums and synthe and melotron parts, and R.M. plays extra guitars. Other contribute to a live setting, Chiron of live bass and M.K. on live drums.
Tracks on "Sweet Poison" range from more progressive and post-black songs to a straighter sounding black metal song. The overall sound though is hard to describe due to the mix of more avant-garde tendencies with black metal. Songs like the opener, Valium Holocaust, is much straighter sounding than it's follow-up track, Aerophobia, which has straighter riffs, but an atmosphere which changes with the riffs and ending in a very off-kilter mood.
What is truely unique to this band alone is their ability to create moods which all differ from each other. While Posttraumatic Stress Syndrome is very disturbing in the vibe it gives off, Dolcontine Blues features a much more melancholic mood. Both of these songs differ from each other, with the latter being much more dominated by the presence of psychedelia and progressive music, the former is much more disorientating from it's aggressive mood-cycles.
Once you get past the first 3 tracks, things begin to move into more avant-garde moods that fit with being abducted. While Posttraumatic Stress Syndrome is the track which first gives off the vibe of a person being abducted, it is on Dolcontine Blues where you first get the mood of a person that has been captured and is unaware of their current surroundings. Fucking Karma is a track that moves through different phases, from more ambient scenes to very aggressive sounding parts.
The U.F.O Is Leaving is an interesting track. Following with the almost story-like concept vibe of the record, this track gives the impression that you have been dropped off on a foreign planet and abandoned. The track itself also leaves an impression with a moody bass oriented song with synthe playing in the back.
The next 4 tracks are where things really get interesting sounding. Rivotril Matja is a track that explores a more traditional song structure that has a catchy bass-line and dynamic guitar work. We Miss Them explores more electronic stylings that mix trip-hop with soundtrack-like orchestration before moving into post-rock territory.
The Eyes Among Stars is the most chaotic song on "Sweet Poison," containing the elements most common to traditional black metal, but of course there's going to be something different in here. Elements of progressive rock still make their way into the structure of the song, moving in and out of traditional black metal and more atmospheric, almost moments of tranquility. Those these quieter moments never really last, it allows the track to move along and settle down before it derails. The finale is the title-track, Sweet Poison. This track contains an almost country/folk styled song with a movie score-like ambiance. This track provides the closure to an album which can leave jaws hanging.
Overall, this record is interesting and very diverse. Creating something that is unique and still has elements that are catchy is a rarity within more progressive extreme music, but Angst Skvadron has done it. Fans of progressive music that explores realms of ambiance and movie-scores will find a lot to love in here.
Overall Score: 8.5
Highlights: Aerophobia, Dolcontine Blues, Fucking Karma, Rivotril Matja, The Eyes Among Stars
Posted by maskofgojira at 2:16 PM