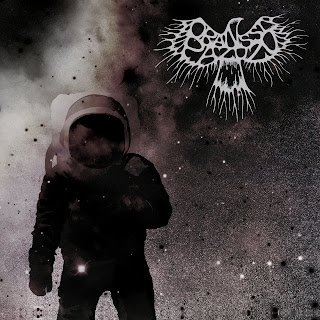 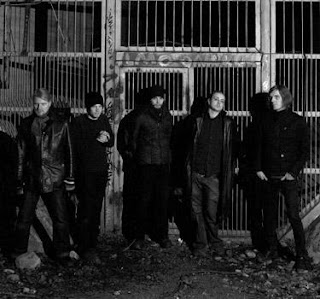 A Hole Left Where They Once Were.

Oranssi Pazuzu is a progressive black metal band from Finland. Formed after the demise of vocalist/guitarist Jun-His' previous band Kuolleet Intiaanit, Oranssi Pazuzu is considered to be a black metal version that band. Combining elements of more 70's oriented music with black metal.
The sound found on this debut is curious. Featuring what some would consider either progressive or psychedelic black metal. While the metal bits are found, as one reviewer said it best, those moments where the guitars are being tremolo picked, it has much more in common with surf rock rather than black metal. But the atmosphere found on here, as well as the vocals bring the vibe of black metal.
Guitars feature a more, almost improvised, approach toward their playing style. Featuring a sound more akin to that of a heavier Pink Floyd or Genesis. The playing gives the psychedelic and 70's vibe while the riffs are very fluid and open sounding, which also adds to the theory of improvisation.
While heavy moments are found throughout, it is where the more progressive and psychedelic passages come in, that the music seems to come alive. Songs like Danjon Nolla contain more aggressive metal features, but seem very cold in comparison to Kangastus 1968. The latter track containing elements found in Pink Floyd while growing into a more King Crimson-styled angular riffs.
As with the more progressive passages being the most enjoyable sounding on the record, so are the longer songs. While shorter songs like Danjon Nolla or Myohempien Aikojen Pyhien Teatterin Rukoilijasirkka feature the more aggressive side of the band, the longer song provide more exploration and an enjoyable listen. Songs like Dub Kuolleen Porton Muistolle and Kerettilainen Vouhi, the 2 longest tracks, provide the listener on miniature journeys through roaming realms of experimentation, the likes seen more on a Pink Floyd track.
While guitars feature prominence along with the vocals, it is keyboardist EviL that creates this band's "signature" sound. Adding layers and textures of delicate piano melodies and lush atmospheres that give the record a different feel from others performing a similar style. When he's not adding atmospheres, EviL is using old-school Hammond and Korg synthesizers to give the music that extra go at 70's psychedelia. Some of his best work occurs during Suuri Paa Taivaasta, where he works those synthes as accompanying guitar melodies or on Kerettilainen Vouhi, where his playing works between adding dissonant pianos and haunting textures.
It is on the final track, Kerettilainen Vouhi, where the band add some newer elements into their sound. Bouncing into areas of post-rock and krautrock, the band's experimentation comes full circle in this finale. Everything builds from a very Floyd-like track into a heavier, more dissonant song that just moves up on the incline as everything builds before a triumphant crash back into reality.
Overall, fans of 70's rock or very experimental music will find this record fascinating. Not really a record many will jump onto immediately due to it's more experimental nature, but those who do will come to enjoy this band immensely. While unknown right now, this band should be watched for what they will do in the future.
Overall Score: 8.5
Highlights: Korppi, Kangastus 1968, Dub Kuolleen Porton Muistolle, Kerettilainen Vouhi
Posted by maskofgojira at 4:29 PM