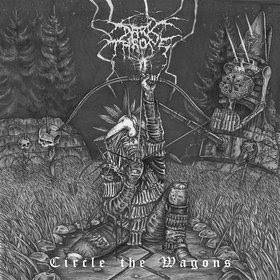 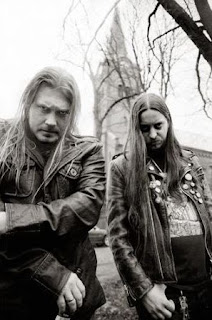 The New School Has Been Crushed By The Generation of Old.

Darkthrone is an essential black metal band that all fans already know about. Over the years Darkthrone has shifted their style from death metal to black metal to more crush punk/proto-thrash style, and on this record, they do it again. Darkthrone has unleashed the almighty hammer of old-school heavy metal onto their fans.
This record still contains those traces of previous records, including the rawness, but more in style, the punk aesthetic. Songs like the title track, Circle The Wagons, and These Treasures Will Never Befall You all contain a very Motorhead and Paul Di'Anno Iron Maiden style of punk rock influenced heavy metal. This punk assault will never leave their overall sound, even within some of the slower numbers that have more in common with Black Sabbath.
Fenriz's drumming on this record definitely brings the Motorhead sound home with a ferocious assault on the kit. I Am The Graves of The 80s perfectly exhibits this, sounding like a track that could have been on "Ace of Spades" era Motorhead. Though his drumming style is not spectacular, it is perfectly suited to the style of Darkthrone.
Nocturno Culto's vocals are more old school as well in terms of his cleans. They fit perfectly within this "new" sound that is being used on this record. Though he never completely abandons his primal screams or bulky shouts, they are less prominent on this album more than any other. Whether it's more the dramatic vocals on the punk title track or the more gruff ones on the technical rock song Black Mountain Totem, they all make this record stand out among the last couple which have each steadily moved towards this sound.
The guitars on this album are fuzzy and dirty and gritty sounding as ever, but the riffs played seem even more catchy. Black Mountain Totem and I Am The Working Class both feature some of the catchiest riffs on the album. The riffs usually stay within the punk realm, being pretty mid-tempo to fast and open-ended sounding but will occassionally move into a more doom realm that is welcome. Black metal riffs never really come into the sound except at the beginning of Eyes Burst At Dawn. The solos on this record are actually very good, very expressive sounding, and unlike many bands, it sounds like a person is playing them, which is refreshing to hear.
Overall, this is a strong record that brings classic metal to the forefront of it's sound. Any fan of metal's younger days, the 70s and early 80s, will fall in love with the rawness and aggression of this record. Definitely worth checking out even if you're not a fan of Darkthrone's older material.
Overall Score: 8.5
Highlights: Those Treasures Will Never Befall You, Running For Borders, Stylized Corpse, Black Mountain Totem, Eyes Burst At Dawn
Posted by maskofgojira at 8:39 PM