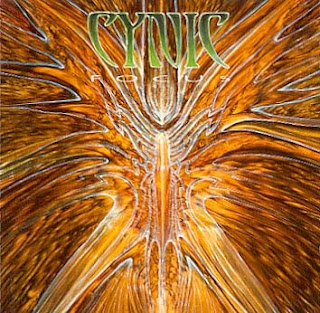 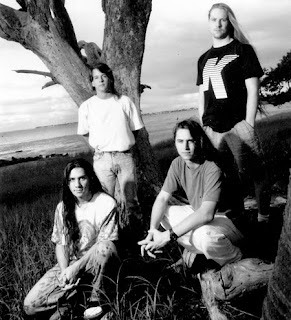 Cynic is a progressive metal band from Florida. At this stage in their career, the first record until 2008, they were one of the first and pioneering bands of progressive death metal. Considering their influence on modern metal, from regular prog to technical death, "Focus" is the birth of that sound.
Cynic, starting as a more death/thrash band with their early demos evolved into the sound that many will consider legendary. Cynic was the first band that had begun mixing outside sources of music with death metal. While main-members, guitarist/singer Paul Masvidal and drummer Sean Reinert, had previously played in death metal pioneers, Death, on the "Human" record, their contribution to that record showed where more odd tempos and technical playing abilities began to surface in the death metal community.
On "Human," more progressive melodies and tendencies began to mix with the extreme metal that Chuck Schuldiner had created. Cynic took where that record went, and reversed it. Where extreme metal was the basis of the sound on "Human," odd melodies and heavy emphasis on jazz-fusion was what replaced it in "Focus." Heavy vocals were still in the mix, as was some of the more death metal sound, but the influence of jazz had infected Cynic's sound and created something that was unlike anything else at the time.
While most death metal bands at the time had made use of the extreme vocals as a priority, Cynic relied less and less on the heavier growls and more on Paul Masvidal's use of a vocoder style of singing. The use of this instrument gave the early "jazz-metal" band an even more alienable sound. While Cynic was still able to tour with a band like Death or Cannibal Corpse, they were not received well due to this more alien sound of jazz and vocoder singing.
Another thing that had stylistically separated the band from even bands like Dream Theater or Fates Warning, at the time, was not only how the members of Cynic played, but the presence of each player. While previously mentioned bands all had each member show off, Cynic was never one of those band's that did show off in the context of a solo or extreme technical riffs. Though the playing abilities of every player on here is felt, with guitars standing side by side with the bass in the mix.
Drums features the standard odd-timing for jazz, but Reinert adds more to his double-bass work than many drummers did at that time, mixing odd poly-rhythms with double-bass footwork. While bassist, Sean Malone stands alone in his incredible bass technique. His playing in Cynic made them stand out with his use of a chapman stick and just the presence of the bass in the overall sound of the band, showcased in Veil of Maya. While guitar players Paul Masvidal and Jason Gobel are no slouches on their instruments. Displaying a use of technical riffs while never seeming to show off in the form of a fast guitar solo, though they do appear, most notably in Uroboric Forms, or long song structures. Every song on this debut is under the 6 minute mark. Never seeming go extend into unnecessary parts of self-indulgence.
Opener Veil of Maya, has become a song that has become somewhat of a legend in the progressive community for it's unique atmosphere and the heavy instrumental prowess of it's players. While songs like Celestial Voyage and Textures have influenced countless numbers of newer bands that have come out in recent years. But no band has since created a record that has stood the test of time like "Focus" has.
Overall, "Focus" could be nothing but a classic album. It's influence on bands, both new and old shows the staying power of this record. From the progressive death metal approach on Veil of Maya to the meditative power of Sentiment to the jazzy instrumental Textures to the incredibly catchy How Could I..., "Focus" will forever be held in a class unto itself.
Overall Score: 10 - Classic
Highlights: Every song is a highlight
Posted by maskofgojira at 12:43 PM