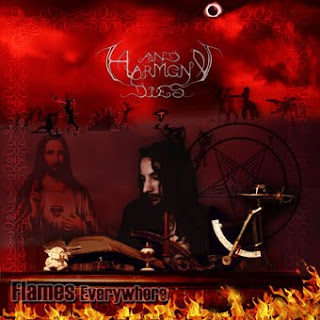 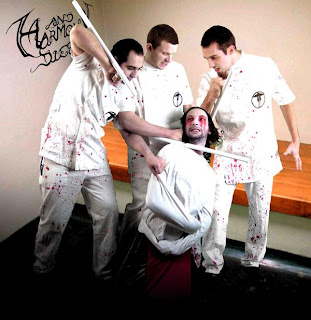 Where Nothing Makes Sense...

And Harmony Dies is an avant-garde metal band from Italy. "Flames Everywhere" is an accumulation of many styles mixed with a more metal sound. Comparisons to this band are very hard to find due to their unique fusion of genres.
The music on this record has so many different style shifts, never seeming to stay in one genre for too long before shifting to another. While some will be turned off by this, it still maintains a sense of melody, where many people reading this are probably thinking that this is along the same lines as Dillinger, while it is closer to that of Sigh or Mr. Bungle.
The instrumentation on this album is another one that could throw people for a loop. With bows to more traditional metal riffs, electronic beats, carnival-like melodies, classical music, solos that extend from neo-classical to flamenco, and folk music, just to name a few, this record takes Mr. Bungle worship into a more understandable direction. The comparison to Mr. Bungle is obvious in And Harmony Dies' sound, but they are able to take the avant-garde tendencies of that band and mix them with the more metal and accessible sound of Sigh, creating a sound between left-wind insanity and progressive exploration.
Opener, Burning Doubt, mixes elements of more traditional metal with classical and folk music. This fusion gives the song a sound similar to that of Sigh, but vocalist Black, has a style unto his own, delivering a range somewhere between operatic and Mike Patton impression.
Black's vocal range is obviously very large. From his more traditional black metal vocals on First Flames to his Mike Patton vocalizations on Psychic Waltz, he mixes each song up with a different take on an already used style. This can obviously be off-putting for someone who likes vocalists with a more linear style of singing.
Hurts, the fourth track, takes Mr. Bungle's avant-garde sound and fully embraces it as their own. Starting very much as a more traditional black metal-ish song, it shifts back and forth, in and out of electronic territories that bring to mind trance or techno music. While Black mixes it up with one of his most singular vocal appearances on the album. While it's follow-up, Blindness INC. clearly demonstrates elements of funk and jazz mixed with symphonic death/black metal. Utilizing the jazz and funk sounds sporadically in the instrumental portions of the song, while the heavier aspects appear to accompany Black's vocals. Whisper's guitar work on this track moves from regular black metal tremolo picking to more neo-classical soloing.
It's very hard to put this band into a singular musical category, because of their mix of genres and styles, avant-garde metal is the closest thing that could be put on them. Though Mr. Bungle and Sigh, already mentioned, are influences that are found the most commonly throughout the album, And Harmony Dies could also draw influence from bands like Solefald, a comparison which appears on Practice, or Carnival In Coal, shown on Hurts with the more electronic showcasing, or Kekal, on the final track Shining and Sailing Soul.
The title-track, Flames Everywhere, is a track where everything seems to come together fully. From the more electronic sounds to classical backdrops to neo-classical soloing to the simpler black metal riffing. On this track, a female vocalist guests with Black's already unique vocals, in a scene that brings to mind some sort of musical or play, since the music that accompanies this vocal duet is very much reminiscent of that sort of thing. The longest song, just over 6 minutes, doesn't seem as long as some of the other tracks.
Overall, this record make for an interesting listen. Fans of avant-garde music or fans of any of the previously mentioned bands will find a lot to love here. Though not entirely metal sounding, it has it's more extreme moments, as well as more quiet moments. Definitely worth checking out for anyone looking for something unique sounding.
Overall Score: 8.5
Highlights: Learning From Literature, Blindness INC., Practice, Flames Everywhere, Time, Shining and Sailing Soul
Posted by maskofgojira at 3:24 PM