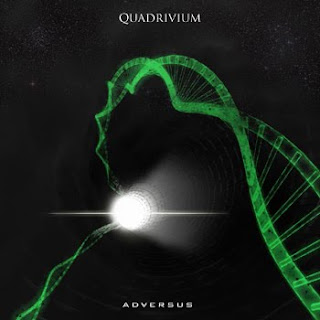 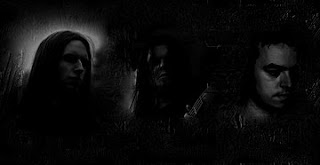 The Best of Both Worlds.

Quadrivium is a progressive black metal band from Norway. "Adversus" is their first album and shows incredible potential for what they might achieve in the future. Influences on their sound are quite obvious from a black metal fan's perspective, so their not entirely unique, but they have something.
Influences on Quadrivium's sound can be drawn from bands like Emperor, Arcturus, old Ulver, Ved Buens Ende, and even a little bit of Borknagar. These give the band a different flavor, bits of symphonic and progressive filter though their more black metal sound. Stripped away of these and the band would most likely be a black metal band with some more melancholic sections. But the overall sound of these guys can be summarized into a symphonic blend of Emperor's works, the progressive tendencies from Arcturus and Ved Buens Ende, and the more folky bits of early Ulver and Borknagar.
What sticks out for most people on this record, probably, is the clean vocals that will appear here and there. No, it's not just an impersonation of Bjornar from Vulture Industries, he sings as a guest on this record. People seem to view the screamer on this album as an impersonator of his style or a rip-off. But the main vocalist, Lars Jensen, from Myrkgrav, provides all of the growls and screams on the record.
Besides vocalist Lars, only two other people are on this record, who are regarded as members of the band. Those two people are bassist Sven-Ivar Sarassen, and multi-instrumentalist Erlend Antonsen, who performed guitar, keyboard, drums, and lyrics on this album. With only two instrumentalist on this record, it shows an incredible amount of vision and potential.
Musically, this record is dense and full of different soundscapes. From the more symphonic elements of the band, which show a great similarity to Vladimir's, from Mirrorthrone, use of symphonic music. The symphonic side of the band is much more orchestraly based, not the kind of symphonic black metal that just uses a synthesizer to replicate the orchestra parts, this uses a wider scope of vision in that department. This type of orchestral sound is shown on every track, but seems more appropriate in a track like Principal Cognizance.
While the guitar riffs range from more groovy mid-paced parts to regular tremolo picking parts. What sticks out the most is in a track like Svartamaal, where the ending goes into an acoustic part that leads into the next track, this drives the more progressive edges home. Another track that introduces more progressive tendencies is the track Is, which features a clean guitar based sections. The introduction of acoustic and clean sections gives the listener take a break from the aggressive sound that the rest of the sound produces.
The drumming on this record is more varied than in most black metal bands. On a track like Nordover, the drumming is more mid-paced and goes into some cool rhythms in the middle of the track, while it's ending is faster and uses blastbeats,bringing a bit of a different flavor to the band's sound. On a track like Works of Glory, faster tempos are utilized more often, on the other hand.
The bass work on the album is pretty much a standard for bass playing. It mainly stays in the back of the sound and rarely comes out. The track that probably has the most emphasis on the bass playing though is Into The Void, a track which features quite a lot of different bass lines throughout the song.
Overall, this is a solid debut record for a new band. Though not completely original in their sound, you can tell that they're on their way to finding something unique. People should check this band out and support them, since they recently got a new clean vocalist and drummer. Watch this band and see what they are able to do next.
Overall Score: 8.5
Highlights: A Sophic Fire, Works of Glory, Principal Cognizance, Into The Void, Is
Posted by maskofgojira at 9:32 PM